Jury sworn in for trial of three former Anglo executives 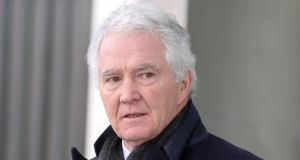 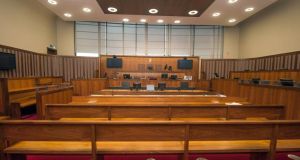 Court 19 at the Criminal Courts of Justice where the trial of three former Anglo Irish Bank executives will begin next week. Photograph: Collins Courts. 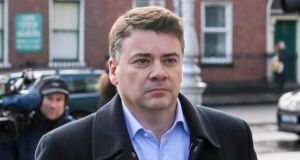 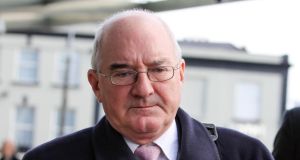 A jury has been sworn in for the trial of former Anglo Irish Bank chairman Sean FitzPatrick and former executives Pat Whelan and William McAteer.

The jury of eight men and seven women was sworn in over the course of two hours at Dublin Circuit Criminal Court today.

The trial is due to begin in evidence next Wednesday at 11am. It is the first time an enlarged jury of 15 has been used, as provided for by an amendment last year to the 1976 Juries Act. The amendment allows for enlarged juries to be selected for lengthy trials.

About 350 people answered their jury summons to appear. The Court Service had sent out 1,500 summons.

Judge Martin Nolan told the assembled panel that any past or present bank employees should not serve on the jury. He also said anyone who has expressed “strong public views” on Anglo Irish Bank or anyone who owns shares in any bank are prohibited from serving.

Mr FitzPatrick (64), of Whitshed Road, Greystones, Co Wicklow; Mr McAteer (62), of Auburn Villas, Rathgar, Dublin; and Mr Whelan (50), of Coast Road, Malahide, Dublin have pleaded not guilty to 16 charges each of unlawfully providing financial assistance to individuals for the purpose of buying shares in

Anglo Irish Bank in 2008. Each charge relates to a specific person who allegedly received financial assistance between July 10th and July 17th, 2008.

The charges relating to Patricia Quinn are alleged to have occurred between July 10th and July 18th, 2008.

Mr Whelan has pleaded not guilty to seven additional charges of being privy to fraudulently altered Loan Facility letters sent to seven of the borrowers relating to the purchase of shares of Anglo. These alleged offences occurred in October 2008.

All three men were dressed in suits as they sat in the dock during the selection procedure.

A list of expected witnesses was read out to the panel. This included Sean Quinn Senior and other members of the Quinn family as well at the ten other borrowers mentioned in the charges.

Judge Nolan told the jurors that the trial will not take longer than four months and said that they must be available up until May 31st.

The judge gave the jury panel a series of instructions before the swearing in process began. He told the panel that it is unrealistic to expect them not to have heard of Anglo but said that anyone who has expressed strong views in public should not sit on the jury.

He said that this includes views expressed on the Internet, including Facebook. Judge Nolan said it would be embarrassing for the jurors if it emerged during the trial that they had expressed views on Anglo on such “permanent forums.”

When the jury was empanelled, Judge Nolan issued it a final warning, saying that jurors should not conduct their own investigations into the case or even read up on it. He said he will regard such activity as a breach of the jurors’ oaths.

Around 150 jurors were called to take the oath. The judge excused 131 of these who said they would have issues serving on the jury. The defence teams objected to 17 jurors and the prosecution objected to two.

The hugely complex trial is expected to last between three and six months.