Judges criticial of plan to alter eligibility for expenses 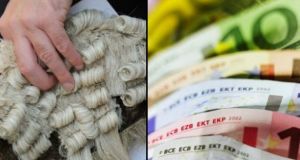 At present, an overnight allowance of €121 can be claimed by judges if they are 24km or more from home. Photographs: The Irish Times/Getty Images

The operation of the courts could be severely affected if proposed changes to judges’ expenses were introduced, the Association of Judges of Ireland warned the Department of Public Expenditure.

Documents released by the department, under the Freedom of Information Acts, show judges strongly opposed a plan last year to only permit an overnight allowance claim for judges who had travelled 100km or more from home.

District Court judges warned they would be forced to terminate court sittings at the “normal time”, 4pm, if the changes were made, in circumstances where they may have sat late.

“There is no doubt whatsoever that the operational needs of the courts will be severely impacted if the circular is applied as proposed,” their submission to the department said.

District Court judges also warned that accidents that might be caused by fatigued judges being forced to drive home late at night because of the proposed changes, could give rise to legal proceedings against the State.

Circuit Court judges said those who normally sat on to finish a case or list would be “less inclined to do so, if they are facing a 90km drive”.

The expenses regime of civil and public servants was changed from July 1st, 2015. Overnight rates were increased from €109 to €125 per night, but the distance a claimant must be from home was also increased, from 48km to 100km, before the allowance could be claimed.

There had been plans to include judges in the changes, but so far, there has been no alteration to their expenses regime.

The AJI submission to the Department, on the “Review of Travel and Subsistence Allowances”, sent in August 2015, said there was a substantial reduction, of 25 per cent, in expenses rates in 2009, and no increase since then.

The association, of which the vast majority of judges are members, said the proposed changes “fly in the face” of the Government’s acceptance of the need to start to unwind pay cuts.

It said the “position of judges is unique and entirely different to that of any other public servants, both in terms of their legal standing and their role and function in society”.

It stressed the independence of judges under the Constitution and urged the legislature and executive to “respect the differences”, and acknowledge that comparisons with other civil servants were “not always legitimate or valid”.

Referring to judges who need to travel extensively, it said the expenses cuts so far had resulted in “increased un-reimbursed outlays”, which were “the equivalent of a significant reduction in pay”.

“The present situation is unfair by any yardstick, and it may be strongly argued, unconstitutional, and the time has come to re-address it in a fair manner,” it said.

It also argued the proposed changes would be financially counterproductive.

If court lists could not be concluded on the day, because of the necessity to drive home, and parties needed to return to court for a resumed hearing, “it is an absolute certainty that the cost to the State will in fact be many times any savings in the expenses paid to the judge”, it said.