Largest claim, for €24,500, was made by District Court judge, new figures show 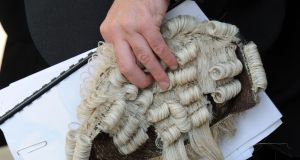 Judges claimed more than €780,000 in expenses in the first half of 2016, new Courts Service figures show.

The largest claim, for €24,500, was made by District Court Judge Kevin Kilraine, who presides in parts of counties Donegal, Sligo and Leitrim.

He claimed more than €15,000 in subsistence and almost €9,000 in travel expenses from the Courts Service.

The second largest claim, for just under €21,600, was made by Judge Séamus Hughes, who presides in counties Longford and Westmeath.

District Court Judge Gerard Furlong, a “moveable judge”, who may be sent to districts across the country, had the third largest claim – €20,870 – which included almost €11,000 for travel and more than €9,900 for subsistence.

The smallest expenses claim made by any judge was for €156, by Supreme Court judge Mr Justice Peter Charleton.

The Courts Service said professional fees have always been paid for judges.

A spokesman also said that any subsistence claims made are vouched.

In some instances, expenses claims may include arrears, while not all judges have made claims this year, he said.

The spokesman said costs recouped are a direct reflection of the number of sittings and the locations judges are required to attend.

The smallest District Court claim, €292, was made by a Dublin-based judge, Miriam Malone.

Seven District Court judges claimed identical expenses of €1,550, for travel only, including the President of the District Court, Judge Rosemary Horgan.

The travel rate paid to District and Circuit Court judges is 70.89 cent a kilometre for cars of 1888cc or more, and is tax free. The civil service tax-free rate is 59.07 cent.

Circuit Court judges may claim mileage from their home to their place of work and back, as can unassigned District Court judges.

District Court judges assigned to districts outside of Dublin may claim mileage for journeys made from home to a court venue and back, subject to a maximum of 90km return.

Subsistence rates for judges of the higher courts, to include an overnight stay, breakfast, lunch and dinner, is capped at €235, while the District and Circuit Court judges’ rate is capped at €121.

The largest claim made at Circuit Court level was almost €16,900, by Judge John O’Hagan, who works on the Northern circuit.

At High Court level, judges claimed almost €51,000 in the first six months of the year.

The largest claim was €3,480, made by Mr Justice Peter Kelly, President of the High Court, most of which was for travel.

Mr Justice Michael White claimed more than €3,250, made up mainly of subsistence expenses, with €900 for incidental expenses.

Ms Justice Deirdre Murphy claimed almost €2,800, including €1,600 for subsistence and €850 for incidental expenses.

In the first six months of 2016, three of the nine judges of the Supreme Court claimed expenses totalling a little in excess of €1,000.

Of the nine Court of Appeal judges, three made expenses claims for travel and subsistence, totalling just under €3,600.

Emma Kelly may be allowed to leave hotel if she tests negative for Covid, High Court told