Mr Justice Abbott refers to involvement of politician and judge 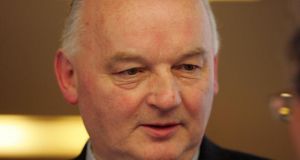 Mr Justice Henry Abbott: said he was “quite improperly” asked by a Circuit Court judge about a ruling in a long-running dispute between parents over custody of one of their children

A High Court judge has said there was “entirely improper interference” involving a politician and a judge in a family law case.

In a judgment made in July and released last night, Mr Justice Henry Abbott said he was “quite improperly” asked by a Circuit Court judge about a ruling in a long-running dispute between parents over custody of one of their children.

Mr Justice Abbott told a judicial inquiry this week that in 2010 he was approached in the yard of the Four Courts by Circuit Court judge Desmond Hogan, who asked was it true that he had ruled in a particular way in the case. A few days earlier, Mr Justice Abbott had ordered that custody of the child be given to the father.

In his judgment, Mr Justice Abbott writes that he asked the mother if she had contacted a member of Dáil Éireann after he had made that order.

He asked the woman if she “asked a Dáil deputy to make inquiries for her in relation to the matter from the judge, and that that Dáil deputy sought the services of a Circuit Court judge to ask me was it a fact that Edward (not the child’s real name) had been sent away to the primary care of the father.”

Mr Justice Abbott continued: “She agreed that she had made that approach to the Dáil Deputy and apologised on the basis that it was at a time when she was unrepresented.”

The High Court judge told the parties that “notwithstanding the entirely improper interference of mother via political representative and judge”, he did not propose to disqualify himself from the case.

After investigating the controversy on Monday, the presidents of the High Court and Circuit Court said the discussion between Mr Justice Abbott and Judge Hogan should not have happened but concluded it had no influence on rulings in the case.

Former Fianna Fáil TD Mary O’Rourke has said she was contacted by the mother in the case through her constituency clinic but categorically denied making an approach to any judge about the matter.

“I categorically deny it,” she said. “I have been 40 years in public life between local and national, and never in my life have I made reps to any judge of any order about any matter relating to myself, family or constituents.”

Judge Hogan told the investigating judges that he was unable to recall the conversation or how he came by the information that a particular ruling had been made in July 2010. He did not dispute that he may have asked Mr Justice Abbott “in a casual way” about the case, but he was satisfied that he had “no solicitation or request to that end from any politician”.

Judge Hogan said there had been “absolutely no intention” of interfering with the case or influencing its outcome, and he “deeply regrets” his query may have given rise to such concern.