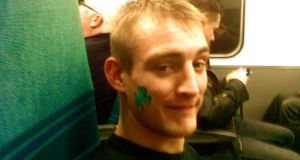 Jed Eddison (30), who was found dead in a Dublin doorway on Sunday.

The background of the man found dead in the doorway of a central Dublin cafe challenges the assumption that rough sleepers bed down on the streets because they have nowhere else to go.

Jed Eddison (30) was not, as initially believed, homeless or a rough sleeper. He was a single man originally from Naas, Co Kildare, but more recently living in Grangecon, Co Wicklow.

His body was found in the doorway of Starbucks – in the former Bewley’s Cafe premises – on Westmoreland Street last weekend.

Mr Eddison had been driven to Dublin by his mother last Friday. It appears he planned to meet up with friends and go socialising in the city for the weekend.

Gardaí believe he became intoxicated and passed out in the doorway on Westmoreland Street. He died there in the early hours of Sunday.

Mr Eddison worked in construction in recent years, but was unemployed at the time of his death. He had spent time living in Germany and the UK.

He had lived in England when he was younger and some members of his immediate family are still based there.

Mr Eddison had a passion for repairing and driving cars. He attended third-level education for a period and was a former student of Blanchardstown Institute of Technology in west Dublin.

The investigation team is also trying to piece together his movements from the time his mother brought him to Dublin until his death two days later.

Sources familiar with the case described his background as “stable and comfortable”, adding he would not have been regarded even as an infrequent rough sleeper.

“His mother would be the kind of woman who would have done everything for him,” said one source.

The discovery of his remains was made by a staff member opening the Starbucks premises just before 7.30am on Sunday. Gardaí were alerted and a doctor was called to the scene, where Mr Eddison was pronounced dead.

Sources said he had been dead for a number of hours before his remains were found. The same sources said revellers making their way home from city centre nightspots would have walked past his body and believed he was sleeping.

It was initially assumed he was homeless or a regular rough sleeper. But city centre gardaí were surprised they had not come across him before sleeping on the streets.

A recent drive to make contact with rough sleepers to advise them about emergency accommodation facilities had reached almost 120 people by last weekend and has since reached just under 150 people.