Skull of deceased was smashed with baseball bat and paving brick 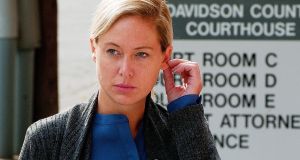 A fight in which a father witnessed his son-in-law apparently attempting to strangle his daughter led to a scene of bloody, extreme violence resulting in the death of Jason Corbett, the son-in-law, the opening day of evidence in the trial of Molly Martens Corbett and her father Thomas Martens heard on Tuesday.

Addressing the jury at the Davidson County courthouse in Lexington, North Carolina, David Freedman, lawyer for Thomas Martens, outlined what his client says happened in his daughter and son-in-law’s home early on August 2nd, 2015.

Mr Martens woke that day and suggested to his wife, Sharon, they take a drive to see their daughter and her family in Wallburg, said Mr Freedman.

They went and Mr Martens brought with him a 17-ounce, aluminium baseball bat to give to Mr Corbett’s son, Jack, as a present. He indicated Mr Martens’s son had played college baseball.

Mr Freedman said Ms Martens drove her husband to pick Jack up at a birthday party, and by the time they arrived home, he decided it was too late to give him the bat. Sharon and Tom Martens went to bed in the basement of the Corbett home. At 3am, Mr Freedman said, Mr Martens heard someone scream and ran upstairs, knowing his daughter and grandchildren were at the top of the stairs.

Grabbing the “little league” baseball bat, Mr Freedman said, Mr Martens approached the scene not knowing what was going on. “The last thing he thought he’d ever see,” Mr Freedman said. “All he sees is his little girl with her husband’s hands around her neck.”

“He thinks he may never see his little girl again,” Mr Freedman told the jury.

In the scuffle, Mr Freedman alleged Mr Martens lost his glasses and feared that he would lose his life. All Mr Martens knew, his lawyer said, was that his little girl was behind her husband and so he began “whacking” Mr Corbett with the bat, not knowing whether he would get back up.

Prior to Mr Freedman’s opening remarks, Davidson County assistant district attorney Alan Martin presented jurors with a representation of what the crime scene appeared to be like when a police detective arrived at the house. Inside the bedroom from the foyer where he was standing, the detective said he witnessed “the naked, dead, bloody body of Jason Corbett”.

Blood was just about everywhere, Mr Martin continued. The victim’s blood was said to be all over the walls, high and low, on both sides of the bedroom door and in the bathroom. Before the jury, he described the face and head of the victim.

A nude Jason Corbett was portrayed, with blood covering his face, in the bedroom with a paving brick and a baseball bat, both covered with blood. Mr Martin said the state’s evidence would show during the trial a horrible killing with only two of the three parties present in the bedroom that night leaving with their lives.

The assistant district attorney contended Ms Martens and her father had almost no marks on their bodies. By contrast, he said Mr Corbett’s skull was badly crushed. Mr Martin said the victim was hit in the head with the paving stone in 10 places, with two parts of his skull damaged more than once.

At least one blow was determined to be postmortem, according to Mr Martin.

“Why didn’t they stop?” Mr Martin asked the jury.

Lawyer Walter Holton addressed the jury on behalf of Molly Corbett, mostly concentrating on the size of Mr Corbett, whom he described as over six feet tall and weighing 262 pounds.

“He was more than twice the size of Molly,” Mr Holton said.