Ivor Bell charged in connection with murder of Jean McConville 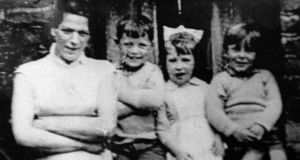 Jean McConville with three of her children.


Former Northern Ireland commander of the IRA Ivor Bell is to appear in court today charged in connection with the abduction and murder of west Belfast mother-of-10 Jean McConville.

The 77-year-old west Belfast man is to appear at Belfast Magistrates Court to face charges of aiding and abetting Ms McConville’s murder. He is also to be charged with membership of the IRA, the PSNI said in a statement last night.

Mr Bell was arrested on Tuesday and questioned by detectives from the PSNI’s serious crime branch. He was arrested in Andersonstown and detained at Antrim station.

Mr Bell, one of the most senior IRA figures in the 1970s and up until the mid-1980s, was due to have been either released or charged by Thursday.

The PSNI was granted additional time to question him until last night, which was when the police, without naming Mr Bell, issued a statement saying a 77-year-old man is to appear in court today.


IRA leader
Mr Bell was one of the IRA leaders in Belfast during the time of Ms McConville’s abduction in 1972 when he would have been aged about 35. He was later to become the head of the IRA’s Northern Command.

Such was his standing within the Provisional republican movement that in 1972 he was part of a republican group that flew to London for talks with the then Northern secretary William Whitelaw.

Also on that delegation were current Sinn Féin Deputy First Minister Martin McGuinness and the Sinn Féin president and Louth TD Gerry Adams. These unsuccessful talks happened after the IRA negotiated a truce with the British in July 1972.

For many years he and Gerry Adams were close associates and friends. But when Mr Adams started pursuing the dual policy of IRA paramilitarism and Sinn Féin politics, Mr Bell became estranged from the future Sinn Féin president.

The IRA did not admit responsibility for Ms McConville’s murder until 1999. One of the Disappeared, her body was recovered from Shelling Hill beach in Co Louth in August 2003.

Support package for publicans needed by end of month, say represenative groups 13:57
Aaron Brady found guilty of capital murder of Det Garda Adrian Donohoe 13:08
Garda Adrian Donohoe profile: ‘Big in heart with so much to live for’ 12:56
Covid-19: Restrictions an attempt to prevent State going back to ‘beginning’ 10:37
Sunny spells forecast with high temperatures of 26 degrees 09:02