Irish Water spends more than €81,000 a week in legal fees 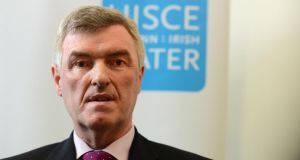 Irish Water spends more than €81,000 a week on legal fees and has paid more than €5 million to three large Dublin law firms since it was set up last year.

Internal figures compiled by the utility company show it has spent almost €4.9 million on legal costs linked to its establishment since August 2013, and a further €335,000 in ongoing operational legal fees.

The total spend on lawyers’ fees is equivalent to one-third of the annual budget of the Office of the Attorney General, which provides legal advice to all Government departments.

The law firm A&L Goodbody has been the biggest beneficiary, having been paid €3.6 million by Irish Water over the past 15 months, mainly for work on procurement, capital projects and legislative compliance. In June this year alone the firm was paid €680,000 in fees.

McCann Fitzgerald, another of Dublin’s largest law firms, was paid more than €1.3 million between August 2013 and October this year, mainly for legal advice and work on legislative compliance.

Smaller payments were made to a number of other firms.

The details of Irish Water’s €5.2 million spend on legal fees were released under the Freedom of Information Act. The company said the figure was part of the total of €172.8 million in establishment costs approved by the Commission for Energy Regulation.

Minister for the Environment Alan Kelly has said the overall establishment costs are “on a par” with those incurred in setting up comparable utilities in other countries, “or in some cases better”, and that he has “no reason to doubt” the €172.8 million requirement.

Irish Water officials told the Oireachtas environment committee in January that all legal firms it used were selected from panels and had gone through “a very stringent legal tendering process”.

The figures on legal spending come at a time of increasing optimism among Dublin’s biggest law firms about their business prospects.