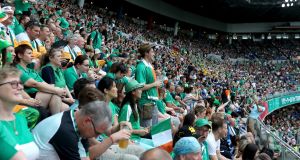 Two Irish men being held in police custody in Tokyo on suspicion of possessing and using heroin face lengthy detentions and deportation if convicted.

The men were arrested on the night of September 26th after staff in a karaoke bar in the Japanese capital’s business and entertainment district of Shinjuku called police, local media said.

One of the suspects is 28 and the other is 31. The second man was found unconscious in a karaoke booth and taken to hospital but subsequently released into police custody.

They are being held on suspicion in Shinjuku of violating Japan’s narcotics control law. Both are reportedly denying the charges. It is understood that the men travelled to Japan for the Rugby World Cup.

The Irish Embassy in Tokyo said staff there were aware of the arrests and providing consular assistance.

Japan had just 14 heroin-related crimes last year and mandates strict penalties for drug offences. Possession of cannabis is punishable by up to five years in prison or seven if the intent is to profit from distribution.

Takashi Tanako, a Tokyo-based lawyer, said normally people facing such charges would be detained for a few weeks before being tried, given suspended sentences and deported.

The arrests are among several incidents involving Irish nationals during the rugby tournament.

A 26-year-old Irish man was reportedly arrested in Hamamatsu City, southwest of Tokyo, on suspicion of assault for allegedly punching two men after Ireland’s shock 19-12 defeat to Japan at Shizuoka Stadium.

According to local reports, police were also called to respond to complaints of drunken rugby fans loudly singing at an Irish pub in Hamamatsu.

Broadcaster Fuji TV reported that supporters “wearing green jerseys” had surrounded police outside a convenience store in the city but no arrests were made over the incident, widely covered in local media.

More than 9,000 police have been mobilised for the Rugby World Cup, which concludes on November 2nd.

A police spokesman said some of the incidents involving over-spirited fans had been troubling, but that most had been well behaved.

A spokeswoman for the Department of Foreign Affairs said it was aware of the arrests. “Should any citizen find themselves in difficulty in Japan, they should make contact with the Irish Embassy in Tokyo where consular officials stand ready to provide consular assistance as appropriate.”

1 Coronavirus: A further 123 cases reported in meat processing plants over past week
2 Luke ‘Ming’ Flanagan bares his bottom half to European Parliament
3 Miriam Lord: Michael Ring came to praise his department, not bury it
4 Mother of three (41) who had to fundraise for her own cancer treatment has died
5 Madeleine McCann case: Police identify German prisoner as suspect
Real news has value SUBSCRIBE