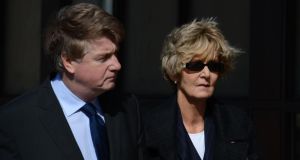 Solicitor Brian O’Donnell and his wife Dr Mary Pat O’Donnell began investing in property in about 2000, assembling a massive portfolio of commercial and office buildings in cities from London to Washington, to Stockholm, to Dublin. The property empire was once valued at more that €1bn. But they were exposed: the couple and their companies had built up debts of €900 million.

When the global recession hit and property values fell sharply, the O’Donnells were left with huge debts secured on the properties. In January 2011 Bank of Ireland took a High Court action against the couple, seeking repayment of €69.5 million in property-related loans. It secured a judgment of €71.5 million against the couple in December 2011.

This was the start of a dogged legal battle that saw the O’Donnells in and out of the highest courts in London and Dublin with wave after wave of hearings, appeals and reprieves. Until today.