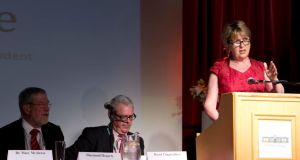 Former president Mary McAleese has said the Irish Innocence Project is an essential support to those failed by the criminal justice system.

“It’s a far cry from my own law student days, when a culture of what I can only call unhealthy obsequious deference prevailed in society and in the law, in the judiciary and, indeed, other institutions like the church,” she said. “We know now how such cultures of unquestioning deference can silence victims and can render them relatively powerless.”

She was speaking at the project’s first international innocence conference at Griffith College in Dublin yesterday. David Langwallner, founder and director of the project, said the event highlighted the “extremely important international human rights issue of wrongful convictions”.

Law and journalism students from Griffith College, Trinity College and Dublin City University are investigating 25 suspected wrongful conviction cases under the supervision of pro bono lawyers. Ms McAleese talked about her involvement in the Birmingham Six, Guildford Four and the Maguire family campaigns.

“I wish we’d had [an innocence project] 30 years ago with personnel, particularly young lawyers and journalists, trained in that sceptical perspective that allows you to see and acknowledge the frailty of the system and yet at the same time believe in the system’s capacity to review itself, to hit the reset button, to think again.”

Human rights lawyer Gareth Peirce, who represented the Guildford Four and Birmingham Six, said: “In Britain, we have once more recreated the circumstance that kept me awake at night for many years in respect of Irish men and women. We’ve created another suspect community where we dehumanise people, we make them part of an image we project.

“If we convict them, like the Irish men and women, the state claims them as symbolic scalps in a political enterprise.”