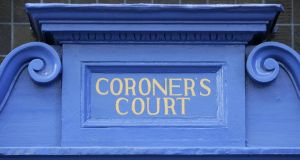 The nephew of a woman who died of hypothermia told her inquest the experience of identifying her body in a portacabin at Dublin City Mortuary was “horrible”.

Noel Gilleece was speaking at the inquest into the death of his aunt Catherine Doyle (85), who was found dead in her apartment at Verschoyle Court, Mount Street, Dublin 2 on January 15th last year.

Speaking from the body of Dublin Coroner’s Court, he told coroner Dr Brian Farrell that he and his mother had to drive through burnt-out containers on the temporary mortuary site in Dublin City Fire Brigade’s training ground in Marino, Dublin, before having to knock on a number of portacabins until it became clear where they needed to go.

“Someone came out to us, I think she was the deputy pathologist, in the freezing cold in the car park to explain the procedures of what would happen,” he said.

“Then we were brought in to identify the body and then it was back out to the car park again to explain more details. It is a horrible experience.

He added: “If that was someone’s son or daughter or wife, I think that place would be very harrowing.”

The Dublin City Mortuary has been housed in temporary accommodation since 1999 following the demolition of the old Victorian City Morgue at Store Street.

It was to be housed in a state-of-the-art facility at the O’Brien Institute in Marino.

Work commenced on the building in 2010 but was stopped due to the recession, and the partially completed structure was later demolished.

Dr Farrell told Mr Gilleece he is “aware of the deficiencies” and apologised to him and his family for the experience they had.

“We have been trying for many years to get alternative accommodation for all concerned, both the staff and the family members who have to go there. I am very sorry.

“We are doing our best to move the project along,” he said.

The inquest heard Ms Doyle was last seen five days prior to the discovery of her body at her bedsit apartment at Verschoyle Court, a Dublin City Council-run complex providing sheltered accommodation.

Council worker Geraldine Halpin said she raised the alarm when she got no response after calling to Ms Doyle’s door on two successive days and saw the gas central heating had not been turned on.

Ms Doyle was found lying on the floor in her night clothes beside her bed.

The pathologist gave cause of death as hypothermia and said she may have been dead for 24 hours before being found.

Returning a narrative verdict setting out the facts, Dr Farrell said the precise date of death has not been determined and the circumstances leading to hypothermia have not been established, but there are no suspicious circumstances.