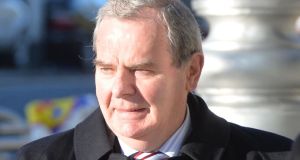 Seán Quinn: his family is alleged to have attempted to conceal €500m in assets from the former Anglo Irish Bank. Photograph: Alan Betson/The Irish Times

The Quinn family may be hiding up to €500 million in undisclosed assets from the Irish Bank Resolution Corporation, unidentified “informants” have told the bank.

The High Court was told yesterday of IBRC’s applications to foreign courts, seeking information about email addresses from Yahoo and other internet companies.

The applications were made this year by the State-owned bank on the back of information given to it by two informants, with whom it has agreed to pay 3 per cent of any money it receives as a result.

Gagging orders were in place over court cases in London and Delaware up to midnight on Thursday.

Yesterday the bank informed Mr Justice Peter Kelly of the foreign actions and the deal with the informants, and said it would now notify the Quinns.

A request for a comment yesterday from Quinn family members met with no response.

The bank has already received details of substantial email traffic between addresses given by the informants and parties the bank believes are involved in a conspiracy to hide Quinn assets.

Next week it expects to receive new information from Yahoo, via the court in Delaware, including the content of this email traffic.

The emails were sent between June 2012 and February this year. In June 2011, the courts ordered the Quinns to desist from efforts to put a foreign property portfolio beyond the reach of the bank.

Claims from the informants included: that a named individual in Investec Bank in London was instructed to buy €300 million in gold for the Quinns, that the transaction occurred in Dubai or Fiji, and that the same individual transferred €200 million from Dubai to the Virgin Islands; that a man called Qasim Mukhtar or Mukhtar Ahmed was acting as a “travelling fixer” for the Quinns; and that Gerry Reilly,of Ballytherm Ltd, Ballyconnell, Co Cavan, acts as the Quinns’ “secret cash dispenser” to “oil the wheels” of the conspiracy to hide assets.

Following a court order in London, information from Investec showed no trace of the alleged transactions. A woman at Ballytherm’s offices said Mr Reilly had no comment. Mr Mukhtar could not be reached.

Joint IBRC liquidator Kieran Wallace told the London court in February that the Quinns had disclosed assets of less than €1 million. The bank believes this is inherently implausible.

The international property portfolio is producing annual rent of $35 million, and $50 million of this has gone missing since April 2011. An investigation of the flow of funds from the Quinn Group to family-controlled entities found €183.7 million that, Mr Wallace said, “cannot be accounted for”.