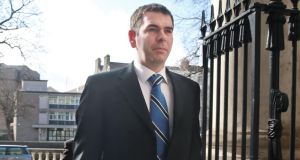 The failure of members of bankrupt businessman Sean Quinn's family to disclose details about what has happened to rents paid from companies within their international property group is a "serious omission" which must be addressed by court order, Irish Bank Resolution Corporation (IBRC) has urged the Commercial Court.

It was also not credible and "extraordinary" for the family to say there is no paper trail related to large sums paid to them under employment contracts with international property group (IPG) companies, Shane Murphy SC, for the bank, argued.

When Mr Justice Peter Kelly suggested that might be because the employment contracts were a contrived means of getting large sums to the Quinns, counsel said, if such a contrivance is established, it would have to be addressed in due course.

The fact the sums paid to various Quinn family members were 10 times those paid to other employees of those companies indicated the Quinns were in control of and mamaging those companies, he added.

There was also a "confusing picture" provided as to what had happened to those monies with several of the Quinns saying they were spent on legal fees but apparently having no documents concerning such payments.

IBRC was contending the Quinns had failed to disclose all documents related to IPG assets and steps taken by them to put those assets beyond the bank's reach, he said.

Mr Murphy was making closing arguments in the hearing where the bank has cross-examined the five Quinn children and two of their spouses - Stephen Kelly and Niall McPartland - about whether they have complied with orders to disclose material related to IPG assets.

The Quinns insist they have disclosed all documents available to them but the bank disputes that.

Mr Murphy said the responses from the family during the cross-examination indicated a need for orders requiring them to make full and proper disclosure or full and better disclosure.

Among the bank's concerns were the failure to disclose details about rents paid from IPG companies and what happened to those monies. The bank also wanted full details of their accounts with Ocean Bank in Moscow and had recently received statements from Sean Quinn Jnr concerning those accounts. Those statements were in Russian and would have to be translated.

The main focus of the cross-examination was to establish steps taken to place IPG assets beyond the bank's reach and it believed further orders were required to achieve that objective, he outlined. The bank believed the Quinns could take steps to retrive deleted emails.