More than 300 recruits finish early as Templemore closes over coronavirus 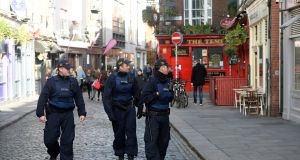 Almost 450 gardaí have mobilised for front line policing in a day to bolster the strength of An Garda Síochána in the biggest deployment of its kind in the history of the force.

The action, which involves closing the Garda College, Templemore, Co Tipperary, saw all 319 recruit gardaí at the college passing out on Friday morning at the college after effectively skipping the remainder of their training for now.

Friday morning’s passing out ceremony, which complied with social distancing protocol, was done behind closed doors, for speed and with no ceremony due to the coronavirus, but has been recorded and photographed for posterity.

Furthermore, because those newly sworn-in gardaí have now been assigned to stations nationwide and the college is closed, 124 Garda members who normally teach at the college or fill other posts there have also been deployed to the frontline.

The unprecedented move has been undertaken to maximise the strength of the force as it attempts to maintain law and order and, if required, enforce the special measures introduced to reinforce social distancing and isolation.

Minister for Justice Charlie Flanagan addressed the newly attested gardaí at Friday’s passing out ceremony, saying the Government and Garda were both determined that nobody would be left alone in the current crisis.

And he told the recruits while they had been fast-tracked, with some of them only two months into their training, they would not be left to fend for themselves on the streets.

“Your experienced colleagues and supervisors will be on hand to guide you,” he said.

“The Government will not be found wanting in our financial support to the organisation. And I urge you to take strength too from the certainty that the community supports you.”

The Garda force now numbers 14,758 of all ranks, including 12,051 Garda members of all ranks; both the largest levels of personnel in the history of the Garda.

Of the newly attested gardaí, 65 have been assigned to the Garda’s Dublin Region, 94 to the Eastern Region, 80 to the Southern Region and 80 to the North Western Region.

Garda Commissioner Drew Harris has also deferred all age-related retirements and the retirements of senior officers who had been due to depart under a severance package and annual leave has been restricted.

The measures will result in an increase of 25 per cent of gardaí on the streets for the duration of the Covid-19 crisis, with personnel working 12-hour shifts.

Senior Garda management believe a high visibility operation is now vital to reassure the public and to ensure the force was well-placed to cope when some members of the force were diagnosed with Covid-19 and some of their colleagues were forced to go into isolation.

Mr Harris said on Friday there had been no change in the role of Garda units that deal with armed crime, drug gangs and other serious crimes. However, a contingency plan was in place for the units who police the Republic in those specialised areas.