Woman expected to appeal application against Government to Supreme Court 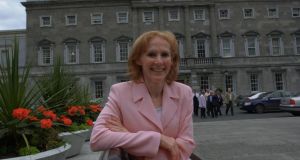 The woman was accompanied in court by former MEP Kathy Sinnott and Mark McCrystal, who had successfully challenged the Government’s spend of public monies on its information campaign in the Children’s Referendum. Photograph: Bryan O’Brien/The Irish Times

The President of the High Court has refused to grant an injunction to a Dublin woman aimed at stopping provisions of the Protection of Life During Pregnancy Bill being voted into law.

Jane Murphy, with an address at Milltown, Dublin 14, made the ex parte application (one side only represented) this afternoon in the High Court and is expected to appeal Mr Justice Nicholas Kearns refusal lo the Supreme Court.

She was accompanied in court by former MEP Kathy Sinnott and Mark McCrystal, who had successfully challenged the Government’s spend of public monies on its information campaign in the Children’s Referendum.

In intended proceedings against Taoiseach Enda Kenny, Minister for Health James Reilly and the Government, Ms Murphy sought injunctions “to prevent the respondents usurping the will of the Irish people on the day of Thursday 11th of July 2013”.

She also sought to bring proceedings aimed at securing declarations “that provisions which stand rejected by the Irish people in a referendum cannot be included in proposed legislation, nor can they be voted on by the Oireachtas”.

She further sought a pre-emptive order that the costs of the application and any subsequent judicial review be granted to her on the basis the case was brought “in the national interest and not for any personal benefit”.

The application stated the intention was to prevent the Government including two provisions in the Bill currently before the Oireachtas and also to prevent the vote on that Bill.

The provisions at issue have been rejected by the people of Ireland in a valid referendum, the notice stated. It also stated: “The provision that protection of the unborn should be limited to the later stage of implantation was rejected in referendum in 2002”.

Another provision “to repeal Sections 58 and 59 of the Offences Against The Person Act 1861 was also put to the people of Ireland and rejected in the same 2002 referendum,” it was stated.

Mr Justice Kearns said he was satisfied he had no jurisdiction to grant any such relief. This matter was before the legislature and the court, under the doctrine of the separation of powers, had no entitlement to deal with it. He did not believe the court, at this stage of the matter, had any entitlement to interfere.

Having delivered his ruling, the judge told Ms Murphy she was entitled to appeal to the Supreme Court.