Opinion: Commission would benefit from being chaired by a sturdy High Court judge 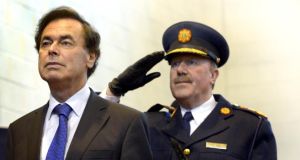 If Martin Callinan, the Garda Commissioner, believed a criminal offence had been perpetrated within the offices of the Garda Síochána Ombudsman Commission (GSOC) it would have been reasonable for him to seek authorisation to monitor the phones of people working in those offices.

That is to say it would have been reasonable for him to monitor those phones provided he had first got the authorisation of Minister for Justice Alan Shatter.

And Shatter would have acted legally if he believed this surveillance was necessary for the purpose of criminal investigation or in the interests of the security of the State (section 2 Interception of Postal Packets and Telecommunications Messages (Regulation) Act, 1993).

Perhaps later today we will find out more about these matters, and maybe we will also find out if any other body sought authorisation to undertake surveillance of the offices of the GSOC or surveillance of any of the personnel in that office.

Both Government parties had long been enthusiastic about establishing the GSOC and giving it adequate powers to supervise the actions of the Garda.

Back in 2001, when Ruairí Quinn was leader of the Labour Party, its then justice spokesman, Brendan Howlin, drafted a Bill that would have established an ombudsman commission with extensive independent powers.


Proposal
When Michael McDowell, as minister for justice in 2005, introduced the Garda Síochána Bill, establishing the Ombudsman Commission, both Fine Gael and Labour thought it was a great idea. Jim O’Keeffe, on behalf of Fine Gael, enthused about the proposal to establish the GSOC but felt it would be better if there were only one commissioner, as in Northern Ireland, not three, as proposed in the Bill.

Fine Gael was in favour of giving the Garda the devil and all. Its spokesman said: “We in Fine Gael want the Garda Síochána to be the best police force in the world – best resourced, best trained, best motivated force” with “cutting edge” technology , “highly motivated new recruits” joining a force “in major need of reform”, with “new Garda stations” filled with lots more gardaí.


‘Missed opportunity’
The then leader of the Labour Party, Pat Rabbitte, intervened at the second reading of the Bill. He thought the McDowell Bill a “missed opportunity”. He wanted a Garda authority, replicating the police authority in Northern Ireland, to keep An Garda Síochána at a distance from political oversight and interference.

He wanted a commission to inquire into Garda reform, as with the Patten commission in Northern Ireland. He was enthusiastic about the establishment of a GSOC but wanted it to have even more independence than was proposed from An Garda Síochána.

Now both parties are complicit in undermining the office they so much welcomed in 2005. The accusations by Enda Kenny and Alan Shatter that, effectively, the commission had acted unlawfully in not informing the Minister for Justice of its investigations into the bugging suspicions wantonly damaged the integrity of the commission.

The impertinence of Alan Shatter in carpeting the chairman of the commission, Simon O’Brien, undermined its independence. The dismissal of the bugging concerns on the part of the commission belittled it.

The submissive conduct of Simon O’Brien, his acquiescence in his humiliation and then his shrinking apology has not done much for the commission’s independence. Such obsequiousness would hardly have been replicated if the commission had been chaired by a sturdy High Court judge, as the first ombudsman commission was.


Embarrassment
Perhaps the embarrassments this has caused the Government may prompt change: an independent Garda authority; a more sturdy ombudsman commission secured by legislative change giving it power to investigate the conduct of the Garda commissioner as well as the force as a whole; further legislative change giving it immunity from interference by the Garda and providing for a serving High Court judge to act as chairperson, sturdy if possible!

The suitability of Martin Callinan as Garda Commissioner might also come into question, given his conduct during the current controversy; his handling of the Garda whistleblowers; and his ultra-defensiveness during the proceedings of the Smithwick Tribunal, where his chief concern did not seem to be the truth of possible Garda collusion in the murder of two RUC officers but the reputation of what he regards as “his” force.

Alan Shatter would seem to be immune from accountability.