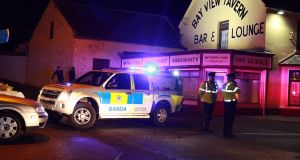 A garda was shot dead last night after responding to a domestic disturbance at a house in Co Louth.

The shooting happened after a woman had gone to gardaí in Omeath on the Cooley Peninsula and expressed her fear that her partner was going to kill her and himself.

The gardaí escorted her to the property on the Mullach Álainn estate in the north Louth village to collect her personal items. When the woman entered the home, the man shot her.

A garda followed the woman into the bedroom, where he was fatally shot with a handgun.

The deceased garda, Tony Golden, a married father of three, had gone to the house just before 6.30pm.

Crevan Mackin, a 24-year-old originally from Co Down, was on bail having been charged earlier this year with membership of an illegal organisation.

Garda Golden was pronounced dead at the scene by paramedics.

Crevan Mackin also died by a gunshot wound which gardaí believe was self-inflicted. The woman was taken from the property seriously wounded.

She was undergoing emergency treatment in hospital and Garda sources said there were fears for her life.

They added that the force had requested assistance from the Police Service of Northern Ireland in the immediate aftermath of the shooting.

Garda Golden was originally from Ballina, Co Mayo, and was the father of two girls and a boy under the age of eight.

He had been living in Blackrock, Co Louth, with his family and was based in Omeath Garda station.

Crevan Mackin had appeared before a special sitting of the Special Criminal Court in January after being arrested in Dundalk.

He was charged with membership of an unlawful organisation styling itself the Irish Republican Army on January 16th.