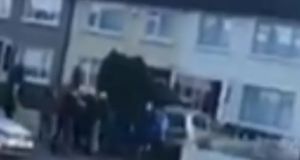 The Garda has warned the activities of online vigilante groups who describe themselves as paedophile hunters create the “potential for violence” and “could result in harm to persons present” during one of the group ‘stings’.

The comments follow an incident on Sunday during which the Child Protection Awareness (CPA) group - a group of Irish women who claim they are exposing the activities of potential sex offenders - carried out a ‘sting’ on a man in Dublin.

A Facebook live video posted to the group’s page depicts a man being approached by a member of CPA known as Louise.

In the video, which is just over half an hour long, she accuses the man of sexually grooming a minor through texts.

About 20 minutes into the video, car horns and male voices can be heard in the background and shortly before the clip ends, the camera drops as Louise shouts at observers to stay back. It is understood the accused man was attacked by onlookers.

In a statement, the Garda said it could not comment or “discuss speculation about the specific activities of such groups operating in this jurisdiction” but warned that the activities of these groups had become “a cause for concern” for gardaí and other police services.

“The activity engaged in and the manner of confrontation between such groups and their targets has the potential for violence and could result in harm to persons present,” said the Garda statement.

“There are also concerns over the legality of the actions of such groups operating in Ireland. Finally, the manner in which such groups operate and how they interact with their chosen targets prior to and during the arranged meeting has the potential to affect future criminal proceedings.”

CPA is made up of self-described “hunters”, who track “predators”, and “decoys”, who pose as children and set up online accounts where they chat to men.

Forensic psychologist Dr Patrick Randall, who was interviewed as part of a Virgin Media Television documentary on the group earlier this month, warned that the use of the word ‘hunter’ and ‘predator’ by the CPA and similar groups in the UK was “emotionally laden” and is “purposely designed to increase alarm among the public and increase the glamorisation of those who engage in these activities”.

Dr Geoffrey Shannon, the Government’s special rapporteur on child protection who was also interviewed in the documentary, warned that children “most in need of our help will end up being let down” if vigilante groups continue to “bypass the law” in their tactics.

The Garda statement said its priority was the safety of children at all times and “to use all lawful means to fully investigate and prosecute crimes which jeopardise the safety of a child.”

It urged any person or group with information relating to the potential sexual exploitation of children to report it immediately to the Garda Síochána “where it will be investigated by professional investigators”.