Demonstration outside Leinster House on Saturday attended by far-right activists 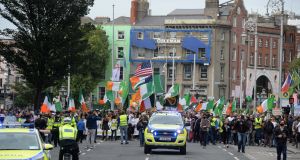 Gardaí are investigating an assault which took place at a protest outside Leinster House on Saturday attended by far-right activists.

The protest was one of two demonstrations which took place in the city centre on Saturday afternoon protesting Covid-19 restrictions and the wearing of masks.

Videos later appeared online showing Ms Kamikaze with blood streaming from a head injury. She said on social media she had been struck with piece of wood wrapped in a Tricolour.

On Sunday Ms Kamikaze described “a wall” of protesters coming towards her. “I was looking around for a knife. I folded my arms to show I wasn’t a threat,” she told The Irish Times.

She said she turned her head to check if her friend was okay and that was when she was struck. “I didn’t see who hit me. I turned slightly and then I was on the ground.”

Footage shared on social media shows masked demonstrators pushing some of the counter-protesters before Ms Kamikaze falls to the ground. Gardaí then attempt to separate the two groups and move the counter protesters away.

An ambulance was called and Ms Kamikaze was taken to hospital for treatment to a head wound. She was released in the early hours on Sunday morning.

Immediately following the protests on Saturday, the Garda said in a statement that no arrests or major incidents had occurred at the demonstrations.

On Sunday in an updated statement the Garda said officers at Leinster House “had to intervene between opposing groups of demonstrators. There were no arrests”.

A spokeswoman said gardaí in Pearse Street are now investigating “an incident of assault that occurred during a protest” but that a formal complaint has yet to be made by the victim. “Investigations are ongoing,” she added.

Ms Kamikaze said she intends to make a statement to gardaí on Monday and to also make a complaint about the manner in which in the incident was policed.

It is understood gardaí have obtained clear CCTV footage of the attacker and were able to track him through the crowd despite him removing his jacket.

The second protest, which was attended by up to 2,000 people, started at the Custom House before demonstrators marched to Government Buildings.

It was organised by a group called Yellow Vest Ireland, which describes itself as a “people’s movement” that is “not aligned to any political group, organisation or politician”.

There was little sign of social distancing at the event and protestors did not wear masks.

Many on the march carried banners with slogans such as “take off your mask” and “it’s only a common cold”.

“An Garda Síochána policed a demonstration in Dublin city centre on Saturday 12 September. One group involved gathered on Custom House Quay from approximately 1pm and proceeded from there to Government buildings. Rolling road closures were put in place to facilitate the movement of those involved and the flow of traffic in the city centre,” a Garda spokeswoman said of the larger protest.

Yellow Vest Ireland encouraged attendees to bring flags on the march. “Yellow Vest Ireland wants everyone in Ireland to feel comfortable about bringing their national flags to this Saturday’s march,” it said on its social media platforms.

During the protest some marchers stopped outside the offices of the Journal, an online news outlet, where speakers criticised its reporting of the Covid-19 pandemic.