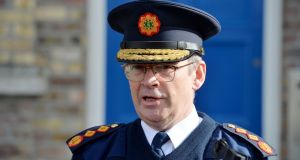 Garda Commissioner Drew Harris is introducing what he believes will be a more robust system for recording and checking each incident. Photograph: Alan Betson / The Irish Times

Garda members in south central Dublin used force more often than their colleagues in other parts of the country but, overall, the use of force by gardaí is low, Garda Headquarters has said.

A new system for counting how often frontline gardaí use pepper sprays, why they use them and whether the incidents are properly recorded, is currently being established within the Garda.

Garda members are already obliged to record when they use pepper spray and account for why they use it.

However, Garda Commissioner Drew Harris is introducing what he believes will be a more robust system for recording and checking each incident. Under those plans, “use of force” data will also be published regularly. Furthermore, the new system for counting and checking incidents and publishing “use of force” trends will be expanded beyond pepper spray to include other forms of force regularly used in policing.

However, an initial set of “use of force” data has been included in a report to the Policing Authority by Garda Commissioner Drew Harris. It defines use of force as any incident in which Garda members drew their guns or batons or deployed pepper spray or stun guns in January and February.

According to Mr Harris’s report to the authority, there were 136 such incidents nationally in January and 84 in February; patterns which he described as “relatively small”.

The drop in force, of 52 incidents, between January and February was accounted for largely in the Dublin Garda divisions, where numbers fell by 21 incidents. Most of the national decrease in the use of force in February related to incapacitant sprays, with 45 fewer discharges than in January.

Despite the overall decrease in force in February, force was used during policing in domestic settings five per cent more often and reduced by four per cent in public outdoor areas.

The report to the Policing Authority notes the Dublin south central division “stayed the highest division for force usage” in both January and February.

Rates of force “significantly” increased in February in the Dublin north central and Waterford Garda divisions while it dropped significantly in Galway.

Garda sources said as Dublin south central was one of the busiest policing divisions in the Republic and also policing the main night life areas of the city, including Temple Bar and Camden Street, it was not surprising force was used more often there.

Mr Harris said a more complete picture of trends in the use of force would become clearer as trends were recorded and published over time. He cautioned against over-analysing increases or decreases in “use of force” trends in each Garda division. “From the review of data nationally it is clear to see that some divisions which had a relatively low use of force in January had higher levels in February,” he said. “An example of this was where in one particular incident, use of force was necessary on a number of persons. “Given the relatively low numbers on a monthly basis, one incident may bring a division into the upper levels of force use, when usually there is a relatively low level traditionally used in that sivision.” The “absolute number of incidents per division is relatively low” so percentage rates of change “should be used with caution”, he said.