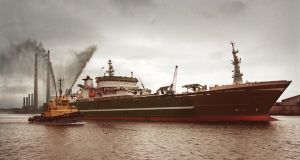 The Naval Service ship LÉ Roisín has detained one of the world’s largest fishing vessels, the former Atlantic Dawn , for alleged infringements in Irish waters.

The 144-metre supertrawler, which is now Dutch-owned and registered and renamed as Annelies Ilena , was escorted into Killybegs, Co Donegal, last night as part of a joint Naval Service - Sea Fisheries Protection Authority (SFPA) surveillance operation.

The vessel, which is the largest ever detained in an exercise of this type in Irish waters, was handed over to the Garda Siochána for suspected infringements relating to “high grading” of fish.

“High grading” involves selecting only the largest of a species and discarding the smaller catch by factory vessels at sea.

The vessel was detained shortly after 11am today some 100 nautical miles north-west of Tory island.

It is the 13th vessel apprehended this year for alleged infringements of fisheries regulations, and the 922nd vessel board by Naval Service patrols in 2013.

The vessel sparked a political controversy after it was built in Norway and delivered to Ireland in 2000 for late skipper and fleet owner Kevin McHugh at a time when the European Commission was trying to reduce overall fleet sizes.

After Mr McHugh’s death, it was sold by his family firm Atlantic Dawn Ltd to a Dutch consortium six years ago Parlevliet and Van der Plas, and has been fishing in international waters.