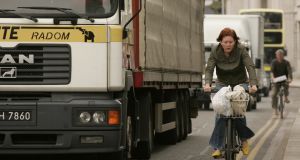 The Road Safety Authority (RSA) has an ongoing campaign recommending motorists maintain minimum passing distances of 1m on roads with a speed limit under 50km/h and within 1.5m on roads with a limit of 50km/h or higher. Photograph: Dara Mac Dónaill/The Irish Times

Five drivers have been punished under laws introduced last year to combat dangerous overtaking of cyclists.

Since November drivers caught “endangering or causing inconvenience” to a cyclist while overtaking or attempting to overtake them face fines of €120 and three penalty points.

Up to the middle of this month, five “fixed charge notices” have been issued to drivers for putting cyclists at risk while overtaking them.

Earlier last year a proposed law to set a minimum passing distance for drivers overtaking cyclists was scrapped after the Attorney General raised concerns. The proposal would have made it an offence to pass a cyclist closer than 1m on roads with a speed limit under 50km/h and within 1.5m on roads with a limit of 50km/h or higher.

Attorney General Séamus Woulfe expressed reservations about the enforceability of such legislation. His concerns were understood to centre around the difficulty in measuring such a distance for the purposes of prosecuting motorists.

Minister for Transport Shane Ross last year said he was introducing the new dangerous overtaking laws because of the “frankly terrifying tales” cyclists told him of “intimidatingly close passes and near misses” by drivers.

Dangerous overtaking in general was already a fixed penalty offence attracting three penalty points; however, the fine was lower at €80.

In the same period that the five drivers were fined for dangerously overtaking cyclists, 14 motorists have received fixed charge notices for general dangerous overtaking.

Separately, at least two convictions were secured last year against motorists – one for dangerous driving and the other for careless driving – where video evidence supplied by cyclists was instrumental.

In one case a van driver was fined €250 after he pleaded guilty to dangerous driving. Video footage had been entered into evidence of a driver endangering a cyclist by passing too close. In a second case, a driver was convicted of careless driving and fined €750 after a cyclist supplied footage of a van travelling towards him on his side of the road as it overtook another van.

The Road Safety Authority (RSA) has an ongoing campaign recommending motorists maintain minimum passing distances of 1m on roads with a speed limit under 50km/h and within 1.5m on roads with a limit of 50km/h or higher.