Firms that breach data rules may be fined up to €100m 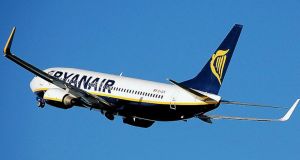 A resolution of the European Parliament last month saw MEPs call for an end to blanket mass surveillance activities by the US National Security Agency.

The resolution was made in the context of a report and recommendations by MEPs aimed at increasing EU citizens’ privacy through EU-wide data protection rules.

MEPs want to see firms that breach these new rules fined up to €100 million, or up to 5 per cent of their annual worldwide turnover.

European ministers of justice will meet in June to discuss the proposed data protection package.

In recent developments in the air transport sector, the European Commission issued new state aid guidelines for airports, which will mean that only the smallest regional airports in Europe will be allowed to continue receiving state subsidies.

This could affect operating models for budget airlines such as Ryanair and Easyjet, who pass on to their customers the lower airport usage fees at regional airports that have been possible because of state subsidies.

Ryanair is expected to appeal further.

The long-running competition law investigation by the European Commission into the interbank fees charged by Visa Europe for credit card payments finally reached a partial conclusion in February, with Visa Europe making a settlement capping the level of its interbank fees for certain consumer credit card transactions and making commitments in respect of cross-border competition.

The arrangement is expected to reduce the fees charged to retailers and ultimately to result in lower costs for consumers, to whom the fees are usually passed on by retailers.

The commission is continuing its action against Visa Inc in relation to fees charged to credit card customers from outside Europe when their cards are used in the European Economic Area.

Finally, the European Commission has referred Ireland to the Court of Justice of the European Union (ECJ) for failure to implement fully the EU’s energy market package.

As reported in this column last year, the commission had warned Ireland that it could refer the State to the ECJ if it did not fully transpose the unbundling provisions in the electricity directive.

Separately, the commission has also referred Ireland to the ECJ for failure to transpose fully the EU’s renewable energy directive.

The commission has proposed daily fines of €20,358 and €25,000 respectively that Ireland would have to pay from the date of the ECJ’s judgment to the date the directives are fully transposed.

1 Covid-19: Seventy cases in Cork traced to local pubs and restaurants in recent weeks
2 Eighteen revelations from a trove of Trump tax records
3 Halloween in the time of Covid-19: Experts advise against trick-or-treating
4 More than 30 people queue overnight to secure property in Carlow
5 Bus Éireann to shut many inter-city routes due to financial pressures
Real news has value SUBSCRIBE