The 66-year-old, known as Lance Corporal J from the Saville report, was arrested on Tuesday 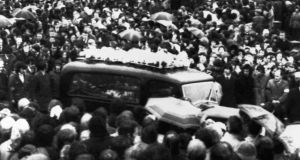 A former British soldier who was arrested on suspicion of murdering three civil rights demonstrators in Derry on Bloody Sunday has been released on bail, police said.

Known as Lance Corporal J from the 2010 Saville report into Bloody Sunday, he was being questioned about the killings of William Nash (19), John Young (17) and Michael McDaid (20), security sources confirmed.

Mr Nash, Mr Young and Mr McDaid were shot dead near the rubble barricade in front of the Rossville Flats in Derry on Bloody Sunday.

The 66-year-old ex-paratrooper was detained by detectives from the Legacy Investigations Branch of the Police Service of Northern Ireland in Co Antrim on Tuesday morning.

He is the first person and the first former soldier to be arrested about the Bloody Sunday killings.

“We reject each of these claims as knowingly untrue. We are sure that these soldiers fired either in the belief that no one in the areas towards which they respectively fired was posing a threat of causing death or serious injury, or not caring whether or not anyone there was posing such a threat,” reported Lord Saville.

“In their cases we consider that they did not fire in a state of fear or panic,” he added.

William Nash (19) – The dockworker was struck by a single bullet to the chest close to the rubble barricade on Rossville Street. Witnesses said he was unarmed, but an initial Government inquiry into the shootings, the much-criticised Widgery Tribunal, claimed he had probably been firing a gun. Saville rejected both this assertion and soldiers’ claims that those they shot at the barricade had either nail bombs or guns.

John Young (17) – The menswear shop clerk was killed instantly with a single shot to the head at the rubble barricade. Based on lead particles allegedly found on his left hand, Widgery found that he had probably fired a gun. Saville rejected this finding, concurring with witnesses who insisted he was unarmed.

Michael McDaid (20) – The barman died instantly after being shot in the face at the barricade on Rossville Street. The downward trajectory of the bullet entry wound led to claims he was shot by soldiers positioned on top of Derry’s historic stone walls, which overlooked the scene. But Saville rejected that suggestion, insisting no one was shot from the walls.

Patrick Doherty (31) – The married father of six was shot from behind as he attempted to crawl to safety from the forecourt of Rossville flats. The active civil rights campaigner died at the scene. A soldier who fired at him claimed he had been armed with a pistol, but a photograph of the factory worker taken moments before he was hit showed no evidence of a firearm.

Gerald Donaghey (17) – Intense controversy has surrounded the question of whether the IRA youth member was armed with nail bombs when he was shot in the abdomen while running between Glenfada Park and Abbey Park. Lord Saville said it was probable that he was in possession of the bombs, but he stressed that he was not preparing to throw one when he was shot.

John “Jackie” Duddy (17) – The keen boxer was the first to be killed on Bloody Sunday. He was running away when he was shot in the chest in the car park of Rossville flats. Lord Saville said he probably had a stone in his hand at the time.

Hugh Gilmour (17) – The talented footballer and ardent Liverpool fan was hit with a single shot as he ran away from the rubble barricade on Rossville Street. A student nurse attempted to treat his wounds but he died at the scene. A solider who fired at him claimed he aimed at a man with a hand gun, but a photo taken of the stricken teenager moments after he fell showed no evidence of a weapon and witnesses insisted he was unarmed.

Michael Kelly (17) – The trainee sewing-machine mechanic was shot once in the abdomen close to the rubble barricade on Rossville Street by a soldier crouched some 80 yards away at Kells Walk. Lord Saville said a paratrooper had falsely claimed the teenager was a nail bomber.

Kevin McElhinney (17) – The grocery store worker was shot from behind as he crawled toward Rossville flats. Witnesses, including a Roman Catholic priest, claimed the rock and roll devotee was not armed.

Bernard “Barney” McGuigan (41) – The father of six was going to the aid of Patrick Doherty, waving a white handkerchief in his hand, when he was shot in the head with a single round. He died instantly.

Gerard McKinney (35) – The father of eight was running close behind Gerald Donaghey in Abbey Park when the bullet that killed both of them hit him first. The bullet passed sideways through his body but did not wound either arm, indicating that his hands were possibly raised at the time.

William ”Willie” McKinney (27, not related to Gerard) – The keen amateur film-maker recorded scenes from the march with his hand-held cinecamera before the shooting started. The camera was found in his jacket pocket as he lay dying after being shot in the back in Glenfada Park.

James Wray (22) – Engaged to be married, the civil rights activist was shot twice in the back in Glenfada Park. The second shot was fired as he lay mortally wounded on the ground.

John Johnston (59) – The draper was shot twice by soldiers positioned inside a derelict building in William Street. He died four months later in hospital. This incident took place about 15 minutes before the main shootings and at a location away from the other killings. The soldiers who fired were targeting 15-year-old Damien Donaghy, who was struck in the thigh.