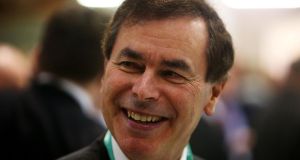 Former minister for justice Alan Shatter: legislation to overhaul the legal profession was published by the then minister. Photograph: Brian Lawless/PA

The European Commission has urged the Government to enact the long-delayed Legal Services Regulation Bill by the end of the year, including the plan to allow barristers, solicitors and other professionals to set up one-stop shops.

The legislation to overhaul the legal profession was published by then minister for justice Alan Shatter in October 2011 but stalled for almost three years and has yet to be enacted. The Bill, parts of which have been strongly opposed by barristers, is due to go to report stage in the Oireachtas later this month and the Department of Justice is planning to make a number of amendments before then.

A chief concern of the barristers is the proposal to allow for the creation of multidisciplinary partnerships, where solicitors, barristers, accountants and other professionals could set up joint businesses for their services. The Government has deferred their introduction for six months after the coming into effect of the Bill but the proposal itself remains in the current draft.

In its report on Ireland’s economic performance, published yesterday, the European Commission called on the Government to enact the Bill by the end of the year, including its provision allowing for the new business structures.

It urged the Government to “monitor its impact, including on the costs of legal services” and “take executive steps” to ensure the Legal Services Regulatory Authority – the centrepiece of the Bill – is operational soon.

The commission said the State must ensure the regulatory authority meets its obligations under the Bill, “including in terms of publishing regulations and guidelines for multidisciplinary practices and the resolution of complaints”.

It said: “Judicial and court administrative resources to implement active pre-trial case management are very limited, which may be contributing to delays in the delivery of justice and raise costs. In addition, there are significant gaps in Ireland’s ability to collect data on the quality and efficiency of the justice system.”