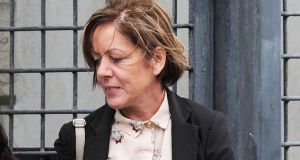 Margaret Loughrey, (50), from Bridge Street in Strabane, also admitted causing criminal damage to the taxi driver’s glasses and to his satellite navigation system during the alcohol-fuelled incident outside her home on May 14th.

As well as imposing a 150-hour community service order on Loughrey, Deputy District Judge Sean O’Hare also ordered her to pay £559 for the damage to the taxi driver’s glasses and to pay the driver compensation of £200.

A Public Prosecution Service solicitor told Strabane Magistrates’ Court that Loughrey, who had no previous criminal convictions, also verbally abused police officers following her arrest. The solicitor said the police were alerted to the incident near the junction of Bridge Street and Chestnut Park in Strabane following a 999 call from the driver.

“He said she was going mad in his taxi and that she had broken his glasses and assaulted him. The driver said he had earlier picked her up in Sion Mills and took her to her home at Bridge Street. She then shouted at him that she had no keys to get into her house. The injured party tried to gain access to the address but when he returned to his taxi the defendant refused to get out of the car,” the solicitor said.

He added that the driver said Loughrey grabbed his glasses and broke them, pulled his satellite navigation system from his windscreen and threw a book, which the driver kept in the back of his taxi, at him. When he decided to drive her to the police station, Loughrey shouted at him “how dare you take me to the police station”. The driver described Loughrey’s behaviour as irate and aggressive.

The prosecution solicitor said Loughrey was highly intoxicated and was argumentative to police officers and had to be restrained when they took her out of the taxi.