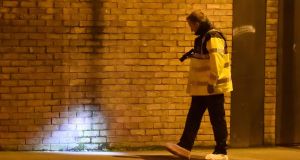 A garda attends the scene of a shooting at Poplar Row in Dublin. Photograph: Clodagh Kilcoyne/Reuters

The shooting dead of Dublin man Eddie Hutch last night is being regarded by senior Garda officers as a direct reprisal for the gun attack on the Regency Hotel in north Dublin, last Friday.

Hutch’s murder brings to three the number of men killed in the emerging gun feud that senior gardaí believe has the potential to dwarf the well-documented gangland disputes in Limerick and in the neighbouring Dublin suburbs of Crumlin and Drimnagh.

In the spiralling Dublin feud, casualties have now been inflicted by two of the most significant Irish crime gangs on each other.

And given the level of firearms, financial resources and gunmen at the disposal of both gangs at a time when Garda resources are so depleted, the worsening violence could yet dominate the remainder of the general election campaign.

Eddie Hutch was a brother of Gerry Hutch, also known as The Monk who was suspected of major armed robberies in Clonshaugh and Marino Mart, both north Dublin, in the 1990s.

Hutch junior was a drug dealer and armed robber, and was once a member of the Spain-based drugs gang led by Dubliner Christy Kinahan (57).

From Marbella, that gang has become the biggest wholesaler of drugs into the Irish market since Kinahan moved abroad on his release from a prison sentence in 2001.

Just over two years ago Hutch junior, who lived for most of the year in Spain, fell out of favour with the Kinahan gang after it accused him of being a police informer.

It blamed him for supplying information, either to the Garda or the police in the UK, that led to the interception of one of its drug shipments bound for the British market.

An effort had been made to shoot Gary Hutch in Marbella in August 2014, but the attack was botched and well-known boxer Jamie Moore was wounded instead.

Gary Hutch fled Spain for a period but after being assured by somebody that he trusted that he would be safe if he returned, he did so.

However on September 24th last he was shot dead pool-side at an apartment block near Marbella. The Kinahan gang are the only suspects.

Garda sources believe that since then the Kinahan gang had made rebuffed overtures to Hutch’s associates in the north inner city to reach a settlement to the dispute.

And last Friday when a number of men linked to Christy Kinahan, including his son Daniel Kinahan, gathered at the Regency Hotel for a boxing tournament weigh-in it was a attacked by a six-strong gang.

Crumlin man David Byrne was shot dead and two of his associates were wounded but survived. Daniel Kinahan escaped injury.

The public awoke on Saturday morning to newspapers filled with photographs of the gunmen entering and fleeing the hotel.

Gardaí immediately placed high visibility and armed Garda checkpoints in those areas of Dublin where the main players in the feud based in the city reside.

However, those measures were not enough to deter the men who shot dead Eddie Hutch last night.

His brother Derek took his own life some years ago and both are survived by two other brothers Gerry and Paddy.

As well as murdered Gary Hutch, another member of the younger generation Derek Hutch is also heavily involved in organised crime including drug dealing and armed robbery.

He is serving life for a stabbing murder after a party in Ashbourne, Co Meath, on St Stephen’s Day, 2007.

1 WHO warns of potential for ‘immediate second peak’ in Covid-19
2 Archaeologists are ‘quite sure’ they have found Red Hugh O’Donnell’s burial place
3 Coronavirus: No new Covid-19 deaths reported in State for first time since March
4 Unidentified man has been in Irish psychiatric hospital for 30 years
5 Coronavirus: What will reopen in Ireland’s phases to ease restrictions and what are the dates?
Real news has value SUBSCRIBE