Early release not uncommon for thousands jailed over fines 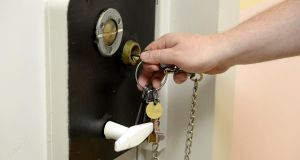 The decision to grant politician Mick Wallace early release, which is very common for people sentenced to jail for the non-payment of fines, was made by a senior staff member of the Irish Prisons Service. Photograph: David Sleator/The Irish Times.

The decision to grant politician Mick Wallace early release, which is very common for people sentenced to jail for the non-payment of fines, was made by a senior staff member of the Irish Prisons Service.

The power to grant early release is a delegated authority to the prison service from the Minister for Justice and Equality and decisions do not involve political input, according to a spokesman for the service.

Every case is decided on its merits and involves consideration of such matters as the inmate’s previous criminal record, if any, the sentence involved, the likelihood of their reoffending, and whether the person is considered a risk to the community.

In a report published on Wednesday by the Law Reform Commission, it was noted that every year district courts direct that thousands of people should be imprisoned for the non-payment of fines, and that the vast majority are processed into the prison system and then released before they have spent a night in jail. Once they have been committed in this way, the requirement to pay the fine is expunged. In 2014, 8,965 people were sent to jail for the non-payment of fines, and most were immediately released.

In the vast majority of these cases, the fines originated from road traffic offences, and the commission has suggested ways of encouraging people to pay such fines rather than the courts and the prison service having to become involved.

In the case of Mr Wallace, he and Clare Daly TD were found guilty of of breaching airport regulations when entering a restricted area and were ordered to pay fines of €2,000 each within three months or spend 30 days in prison if the fines were not paid. He was sent to Limerick Prison because it is the appropriate jail for persons sentenced by the Ennis District Court

Every day prison governors inform the Irish Prison Service headquarters in Longford as to the people who they are considering releasing and related matters. The Governor of Limerick Prison, Mark Kennedy, was most likely part of the discussion as to what should happen with Mr Wallace. The head of the Irish Prison Service, Michael Donnellan, would have been kept informed.

Last year anti-war activist Margaretta D’Arcy (81) served time in Limerick Prison after protesting against the use of Shannon Airport by the US military.

She refused the district court judge’s request that she sign a bond undertaking to remain lawful and not to enter unauthorised zones at the airport. She was given a two-week sentence and served a number of days in prison. Earlier last year Ms D’Arcy served nine-and-a-half weeks of a three-month sentence for a similar offence - initially at Limerick prison and then at Dóchas women’s prison in Dublin.