DUP ‘disappointed’ at criticism of Smithwick 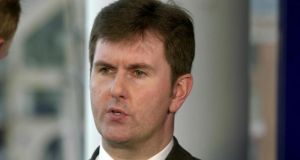 Jeffrey Donaldson says the State “should not be deflected” on acting on the tribunal findings. Photograph: Eric Luke

Democratic Unionist MP Jeffrey Donaldson, who was instrumental in the setting up of the Smithwick Tribunal, has said he was “disappointed” to hear of the challenge to the tribunal’s findings.

Mr Donaldson, who used House of Commons privilege to name a member of the Garda as someone who was passing information to the IRA, said the State “should not be deflected” on acting on the tribunal findings.

He said the Government should consider “follow through” in pursuit of those responsible for wrongdoing. “If the Garda are not prepared to do this then you have to ask what was the point of the tribunal at all,” he said.

Mr Donaldson, who was a party to the Weston Park agreement in 2000, in which Irish and British authorities agreed to examine alleged collusion on both sides of the Border, said “the work of the tribunal was detailed and thorough”. He said he was disappointed that former Garda officers could be “so dismissive” and he believed they had displayed “not much understanding” of the tribunal’s work.

“The tribunal concluded there was collusion. The Garda needs to revisit and reinvestigate any elements that emerge. With the passage of time that becomes more difficult, but that doesn’t mean this avenue is closed,” he said.

Sources close to the tribunal said “no comment whatsoever” would be made by the chairman Judge Peter Smithwick on the challenge to his report.

William Buchanan, son of one of the RUC officers killed in the IRA ambush, was said to be studying the reports in yesterday’s Irish Times and would consider a comment later.

Attempts to solicit a comment from the PSNI and Garda representative groups were not successful last night.

However, sources close to the northern authorities said the three former gardaí were not to be considered neutral parties to the tribunal.

Referring to information on CB radio traffic, which was detected on the day of the killings, the source said a number of witnesses had corroborated this, and these were detailed in the tribunal report, and could not be dismissed.

The source also said the three former gardaí appeared to put a lot of faith in information from the IRA. “It appears that, when it suits, whatever the IRA says goes,” he said.