Proposals could have resulted in increased costs across the justice sector 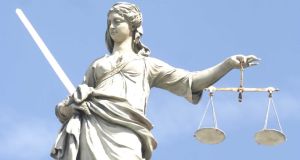 The Courts Service, which is responsible for managing the courts, said in June the proposals would result in improved services in courtrooms that were equipped with facilities and support services that could not be provided in suburban courthouses.

A proposal to close four courthouses in Dublin and reorganise how the services are delivered in the capital has been shelved, the Courts Service has announced.

The service had published proposals to close Dún Laoghaire, Tallaght, Swords and Balbriggan courthouses in an overhaul of the District Court system.

It had also proposed dealing with all traffic cases in Blanchardstown court.

The Courts Service, which is responsible for managing the courts, said in June the proposals would result in improved services in courtrooms that were equipped with facilities and support services that could not be provided in suburban courthouses.

However, in a statement yesterday, a spokesman said the service had “decided not to proceed with the reorganisation at this time”.

The spokesman said the Courts Service had undertaken extensive consultation with court-users across the city, county and justice sector, and “engaged thoroughly and listened actively to what people told us”.

“While the reorganisation as proposed would yield significant benefit to the Courts Service, we have always been aware of the potential impact on court-users.

“We have now been told that the proposals could also result in increased costs across the justice sector and be organisationally challenging for other agencies in the sector.”

The issues that triggered the review, which included staff shortages and budget pressures, remained the same, he said.

The spokesman denied suggestions that there were plans to close other courthouses around the country, and emphasised that business was not being moved from Nenagh courthouse in Co Tipperary.

He said the whole country had already been reviewed.

There were widespread welcomes from interest groups for the decision by the Courts Service.

Ken Murphy, director general of the Law Society of Ireland, said the organisation was very pleased.

The public interest case against the closures was overwhelming, he said.

He described the plan to centralise all road traffic cases in Blanchardstown as “bonkers”.

He said since 2008 some 77 court venues have closed, including at Rathfarnham, Kilmainham and Dundrum in Dublin, and “the rationalisation has ceased to be rational”.

Mr Murphy said the Courts Service budget had been cut by 40 per cent and it was time for a debate on the effects of the cutbacks on the justice system.

A spokeswoman for the Bar Council said the decision was a good development for people to ensure their courts are kept within their locality. It also made economic sense for witnesses and members of the court such as the Probation Services and gardaí.

“The Bar Council is happy to continue working with the Courts Service in creating further efficiencies in the system.”

Dún Laoghaire BID company, which represents over 800 ratepayers in the town, said it undertook an extensive campaign to prevent the closure of the local courthouse and welcomed the decision.

Chairman Don McManus said the organisation was delighted the Courts Service had taken their concerns seriously.

“This is a big win for the Dún Laoghaire business community.”

Local councillor Barry Ward said he was delighted Minister for Justice Frances Fitzgerald had listened to the concerns of the people.

Cllr Mary Hanafin (FF) said the decision was a perfect example of how local councillors, community, businesses and court-users all worked together to make a strong case to protect the courthouse.