Donegal crash dead families may face Garda bill of €10,000 each 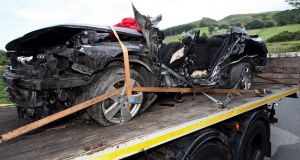 More than 250 witness statements were collected by gardaí in advance of the criminal trial of Shaun Kelly. Photograph: Paul Faith/PA Wire.

The families of eight people who died in a car crash in Co Donegal, could face costs of more than €10,000 each for copies of Garda documents already prepared for completed legal proceedings.

More than 250 witness statements were collected by gardaí in advance of the criminal trial of Shaun Kelly, convicted of dangerous driving in 2014, following the single biggest loss of life from a car crash, at Inishowen in 2010.

Families of the bereaved, who asked for copies of the documents at their relatives’ inquest, completed earlier this month, were told they would have to pay for them.

Gardaí charge €60 for a copy of the abstract of the Garda report, and €40 for each copy of a witness statement. There are also charges for copies of photographs. At the time of going to press, gardaí could not supply a figure for photograph costs.

Road safety group Parc (Public Against Road Carnage) has lobbied for the abolition of the fees since 2009.

“These documents are often the only way that families have of getting information about the circumstances which led to their loved one’s death,” she said.

An accused person can see the entire book of evidence “free of charge”, but bereaved families are deprived of any information until after the conviction, and “must then go and pay for it”.

“This shows little compassion for those who are victims and is perceived as nothing short of a revenue collection exercise on the part of An Garda Síochána,” Ms Gray said.

She said the Garda Síochána Ombudsman Commission gave documents free of charge to relatives on “humanitarian grounds” when they investigate a fatal road traffic collision involving gardaí. She asked why humanitarian grounds could not be applied to other fatal crashes.

She said if the Garda needed to raise revenue, this could be done instead from people convicted of breaching road traffic legislation.

A Garda spokesman said the fees were originally set by the Department of Justice, to recoup the cost of providing such documents.

The Department of Justice has said the charging of fees, and the appropriate level of those fees, are matters for the Garda authorities to decide.