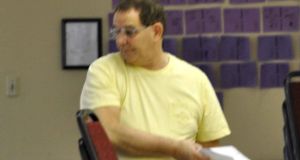 George Gibney: a judicial review prevented the case from proceeding due to the length of time elapsed since the alleged incidents took place

A Garda detective superintendent has been appointed by Assistant Garda Commissioner John Twomey to engage in a fact-finding mission in relation to the former Irish Olympic swimming coach George Gibney. The investigation is to begin immediately.

Mr Gibney, who is now living in Florida after receiving a green card from the US authorities, was charged in Ireland in 1993 on 27 counts of indecent assault and unlawful carnal knowledge of young swimmers.

A subsequent judicial review prevented the case from proceeding due to the length of time elapsed since the alleged incidents took place. Mr Gibney claimed he could not remember details of the incidents that went as far back as the 1960s.

Additional complaints were made against Mr Gibney after the original case. However, the Director of Public Prosecutions decided not to pursue them.

Independent TD Maureen O’Sullivan brought up the case at the beginning of March. She did not mention Mr Gibney by name in her series of Dáil questions, referring to him as a “a notorious swimming coach accused of multiple cases of sex abuse who was granted a visa to live in the United States”.

“I am pleased with the way the Garda have responded,” Ms O’Sullivan said. “The assistant commissioner came to me very quickly and has now asked a superintendent to look into the facts that I brought to the Dáil in Question Time.

“There are still questions surrounding how things were handled in the past. It would be extremely valuable for this fact-finding mission if victims could come forward.”

Ms O’Sullivan believes there was “a litany of mistakes” in the way the case was dealt with and some of the excuses made then would no longer be acceptable.