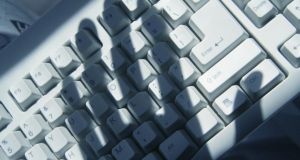 Among the leaked emails, files and digital records were four emails sent between members of the Defence Forces and employees of the company. Photograph: Getty Images/iStockphoto

Emails sent between members of the Defence Forces and a company specialising in hacking and eavesdropping have been leaked online.

A Defence Forces spokesman said it could not comment on the matter but confirmed goods or services had not been bought from the Italian-based company, Hacking Team.

The firm was hacked and 400GB of data downloaded from its files, some of which has since appeared online.

The company’s Twitter account was also hacked in what appears a deliberate attempt to undermine or embarrass it.

Among the leaked emails, files and digital records were four emails sent between members of the Defence Forces and employees of the company.

The first leaked email is dated July 3rd, 2012, and relates to organising a meeting between Defence Forces personnel and the company’s account manager in Prague, Czech Republic, following an earlier meeting,

Other emails were exchanged in April 2014 in which a meeting at the end of 2013 was mentioned. In the most recent email, dated May 28th last, a named Defence Forces member tells a Hacking Team employee he looked forward to meeting him the following week.

While the emails relate mostly to the logistics around organising meetings, the company employee at one point queries whether the Defence Forces planned to purchase “solutions” as previously suggested.

The emergence of the material brings into the spotlight the Defence Forces’ contacts with entities in the private sector from which hacking and spying technology can be purchased.

The leaked material makes references to what are purported to be Hacking Team clients, including the FBI, US Drug Enforcement Administration and security agencies in Egypt, Morocco, Nigeria and Kazakhstan.