It’s a terrible time for everybody, says Jerry McCabe’s brother-in-law, an ex-garda 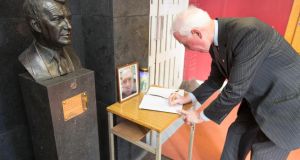 killing of Garda Tony Golden in Co Louth has brought back “horrible, dreadful” feelings for his family.

Speaking as he signed a book of condolence at Henry Street Garda station in Limerick city, next to a bust of the slain detective, Pat Kearney said the McCabe family suffered trauma after his murder by the IRA in a botched post office robbery almost 20 years ago. “It reawakens horrible, dreadful memories of Jerry’s murder in June 1996 in Adare and our sympathies go out to the Golden family,” said Mr Kearney.

A former garda, Mr Kearney said morale in the force was already at an all-time low and this latest tragedy will further rock it.

“It’s a terrible time for the Garda. The morale in the Garda, I know through my contacts, is at rock bottom and this certainly is going to impact on them in a dreadful way,” he said.

“The gardaí do not have protection to suit the circumstances of the job they are taking on. They are going into the unknown every night they go out on duty. There are young criminals out there armed to the teeth who don’t give a damn about guards or society or about judges or prison.

“Something has to done to put ‘smacht’ on the criminals of this country,” he said.

Mr Kearney said Sunday night’s tragedy in Co Louth also brings back memories of the murder of Garda Adrian Donohoe, whose brother-in-law is a garda based in Limerick.

“It’s an awful thing to say that nobody has been charged for murdering Adrian Donohoe; a young man with a young family again. It’s a terrible time for everybody,” he said.

A Limerick auctioneer who is married to Jerry McCabe’s sister Eileen, Mr Kearney insists that, while he would not like to see gardaí armed, he believes they should be “better equipped, better trained and better resourced”.

“The Garda put in tremendous hard work in getting criminals to court and then we hear about suspended sentences, probation etc. It doesn’t augur well for the mentality of a young garda going out on duty today.”

“Nobody deserves to die in the line of duty. I was at home and I heard on the radio there was a book of condolence and it was lovely of his colleagues here in Limerick to do one,” Mr Keogh said.

“It’s very sad that one of their colleagues died and he was only going out on routine patrol. It’s a very sad day for the Garda Síochána of Ireland to lose another colleague, especially when one of their own colleagues was shot dead near that place three years ago,” he said.

Limerick City and County Council has opened separate books of condolences in memory of the victims of the Carrickmines fire on Saturday and Garda Golden.

Members of the public are invited to sign the books which will be at council offices in Dooradoyle and Limerick City and County Council corporate headquarters in Merchants Quay from 9.30am to 4.30pm each weekday until October 23rd.

People can also sign books of condolences online at limerick.ie/council.