David Drumm moves to an open prison in Co Cavan 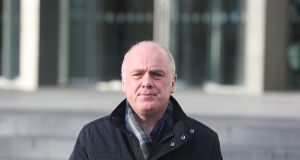 Drumm, who was convicted of conspiracy to defraud last year and sentenced to serve six years, had been serving his sentence in Mountjoy Prison.

However, it is understood he was moved on Thursday by the Irish Prison Service (IPS) to Loughan House in Cavan after the move was approved in recent weeks.

It would not be unusual for a prisoner convicted of a white-collar crime, who is generally seen to be low risk, to be moved to a lower security facility such as Loughan House.

The IPS describes the facility as “an open, low security prison for males aged 18 years and over who are regarded as requiring low levels of security”.

Drumm was one of the defining figures of both boom and bust in Ireland, and was feted alongside former Anglo Irish Bank chief executive Seán FitzPatrick for his banking prowess during the Celtic Tiger.

However, when the property bubble collapsed, he was vilified and eventually forced from the bank, after it had first been guaranteed and then nationalised. He relocated to the United States, where he lived and worked in Massachusetts for a time, before returning to Dublin to face trial on charges of conspiracy to defraud and false accounting.

He was convicted last summer of a series of transactions which inflated Anglo’s deposit book, making it look like the bank had €7.2 billion more in cash than was the case. It was one of the longest-running criminal trials in the history of the State.

At his sentencing last June, Judge Karen O’Connor said his offending “was premeditated and planned, and in fact the evidence was that significant planning went into this fraud”.

She said in her ruling that “Mr Drumm, along with others, put together a dishonest scheme and engaged in transactions designed to inflate deposits from a non-banking entity to Anglo Irish Bank on 30th September 2008, which was the reporting year-end date for that bank”.

Drumm, a native of Skerries in north Dublin, led Anglo Irish Bank between 2005 and 2008. He qualified as an accountant before joining the bank as an assistant manager. He led the growth of the bank’s US business in the late 1990s and early 2000s. After being appointed, he grew the bank’s loan book and market capitalisation rapidly – but ultimately stepped down six days before Christmas in 2008.