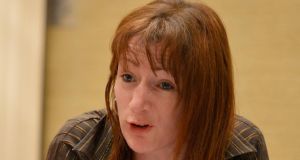 Independent TD Clare Daly claimed in the Dáil recently that a serving garda had shot dead a member of the public and a colleague who witnessed the shooting was ordered to conceal the fact that he was there. Photograph: The Irish Times

TDs have abused the legal privilege they enjoy when speaking in the Houses of the Oireachtas to malign gardaí, the Garda Representative Association (GRA) has said.

General secretary PJ Stone told delegates at the association’s annual conference in Tullow, Co Carlow that an allegation made by Clare Daly TD (Ind) a fortnight ago about members of the force was “shocking”.

Ms Daly claimed in the Dáil that a serving garda shot dead a member of the public and a colleague who witnessed the shooting was ordered to conceal the fact he was there.

Last year, an associate of the Garda member allegedly at the shooting forwarded information to the Taoiseach, Enda Kenny, on what was claimed to be a cover-up.

The case is one of some 300 inquiries into alleged Garda misconduct under way at the Department of Justice.

“I would say to all Dáil deputies, if you have something to say will you come outside and say it, and then we will deal with it appropriately,” Mr Stone said.

“It is very serious in the sense that somebody can hide behind the privilege of Dáil Éireann,” he added.

He said the case had “tremendous connotations” because of its seriousness.

Mr Stone said this was the latest in a series of incidents in which some Dáil deputies had acted unfairly towards and taken the good character of Garda members.

“But this is now being used as a mechanism, as a tool, to throw out spurious allegations against members of the Garda Síochána.”

He said Independent TD Mick Wallace last week read a letter into the Dáil record from the Garda Síochána Ombudsman Commission (Gsoc) to Ms Daly’s solicitor outlining how the lack of co-operation from Garda members had delayed its investigation into her complaint about the manner of her arrest in January 2013 on suspicion for drunk-driving, and the fact it was leaked to the media.

However, it transpired the letter was almost two years old and the investigation had since been completed.

Minister for Justice Frances Fitzgerald and Garda Commissioner Noirín O’Sullivan at the GRA conference on Tuesday urged Ms Daly to make a formal statement of complaint to the Garda or Garda Síochána Ombudsman in relation to the alleged shooting incident involving gardaí.

However, Ms Daly said she was not a witness and therefore had no information to pass on and no statement to make.

She pointed out a person who believes they have information had already passed it on to the Taoiseach.

However, she said the person making the allegations has had no contact from anyone conducting the review of the 300 cases, which Mr Kenny said in the Dáil was still ongoing.

Ms Daly said she found it “incredible” that Ms O’Sullivan did not know about the detail of the allegations and that Ms Fitzgerald was in a similar position, feeling the need to request a report into the matter a year after the information came to light.

“It beggars belief that they were not privy to this information,” she said.