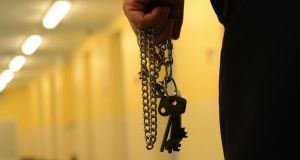 A wide-ranging review of the Irish Prison Service, to include the ‘culture within the service’, and whether it meets its objectives, has been announced by the inspector of the prison service, judge Michael Reilly. Photograph: Cyril Byrne /The Irish Times

A wide-ranging review of the Irish Prison Service, to include the “culture within the service” and whether it meets its objectives, has been announced by the inspector of the prison service.

Judge Michael Reilly, who is independent of the Government, said he expects to have a report with recommendations for Minister for Justice Frances Fitzgerald by September this year.

It is the first time the inspector has embarked on a broadly-based report into the culture and objectives of the prison service. Previous reports have included annual reports and reports into specific issues such as prison deaths or the operation of specific prison units.

The terms of reference of the new review are to “to carry out an assessment of the current culture within the Irish Prison Service and the extent to which it facilitates or hinders the development of the service”, Judge Reilly said.

He outlined five key areas which the review would cover. These included:

* The present structures within the Irish Prison Service.

* The roles and responsibilities of those working in the service.

* Whether or not the present method of service provision meets the objectives and stated vision of the Irish Prison Service.

* The training and continuous development of prison staff at all levels.

Announcing the review, he said there had been positive developments in recent years, such as reduced numbers of prisoners, improved conditions for prisoners as well as new initiatives like a scheme for prisoners returning to the community.

But he said it was important “these positive developments be reinforced by a positive culture at every level in the organisation and this review is meant to assist in reinforcing such positive culture”.

In order to ensure that his review would stand scrutiny “from any quarter” Judge Reilly said he would joined by international expert on prison issues, Professor Andrew Coyle, emeritus professor of prison studies at the University of London.

News of the review was welcomed by Ms Fitzgerald, who said she believed more could be done “if we build on the investment already made by Government, management and staff of the Irish Prison Service at all levels.”

It also “ strongly” welcomed “the statement of support” from Ms Fitzgerald “and the Ministers ’ ongoing commitment to reform in prison and penal policy”.

However, the trust said the review did “not diminish the acute need for stronger accountability mechanisms” in the Irish prison system.

The trust restated its calls on the Ms Fitzgerald “to act on commitments in the programme for Government, and progress the Inspection of Places of Detention Bill with urgency.”

Responding to the announcement , IPRT deputy director Fíona Ní Chinnéide said it was essential that all stakeholders have confidence in the process.

“The highest standards of oversight should apply to any institution, be it a hospital or school or prison, and must be rigorously observed. As history has shown, the need for robust systems of accountability are even more critical behind closed doors, ” she said.

Burglar jailed for sexually assaulting woman who awoke with his hand on her throat 16:32
Convicted fraudster surrendered to UK authorities 16:27
Minister criticises ‘whiff of xenophobia’ to some TDs’ comments on quarantining 16:27
Woman jailed for assaulting a family friend who was trying to break up a fight 16:07
Judge sanctions €7,500 settlement for child over lip injury 15:45