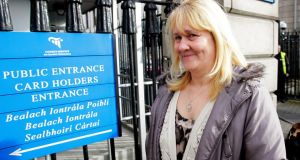 Sylvia Deehan (above) has today had a damages claim dismissed at the High Court. The claim was for injuries she said she sustained after being knocked down at an Ann Summers lingerie party held at a Dublin pub. File photograph: Brian Lawless/PA Wire

The High Court has dismissed a woman’s damages claim for injuries she said she sustained after being knocked down at an Ann Summers lingerie party held at a Dublin pub.

In his judgment today, Mr Justice Max Barrett ruled Sylvia Deehan was not entitled to recover damages against the owners of the Lough Inn public house, and threw out her action.

The judge said he accepted Ms Deehan was a decent woman who was entitled to sympathy for the injuries she suffered following her fall in the pub. He added he said accepted her version of events of what happened that night.

However, he said he could not find that the Lough Inn had been negligent, adding it had not been proven that the pub had, on the night of the incident, “failed to take all reasonable steps to safeguard its patrons against risks and dangers that were foreseeable”.

Ms Deehan (46), a mother of two, of Maple Avenue, Ballybrack, Dublin, has sued Loughlinstown Inn Ltd, trading as the Lough Inn Public House, for damages. Her claims were denied.

Ms Deehan alleged she was pushed by another woman who was striving to grab a prize described “as a ring that goes around a certain part of a man” which had been thrown in the air by an Ann Summers representative at the pub at Loughlinstown, Co Dublin.

The alleged incident occurred as part of a ladies’ night held in the public house, prior to a performance by the Hunks of Desire male stripper troupe on January 21st, 2011.

The action came before Dublin Circuit Court last June but was dismissed. Ms Deehan appealed that ruling to the High Court.

The appeal was heard over three days and involved testimony from a number of people who were present on the night of the alleged incident, staff at the bar, engineering experts and a friend and a relative of Ms Deehan’s.

The court heard that before the stripper event - the highlight of the night attended by about 70 people - Ms Deehan and a friend had made up one of several pairs that participated in a game involving bursting balloons between their bodies.

After she and her friend tied for first place with another couple in having burst the most balloons, the Ann Summers representative threw the prize up in the air between them.

As she went for the prize, she was shoved aside by another woman and fell against the leg of a loudspeaker, injuring her ribs, she said.

She was unable to breathe properly and was crouched over. Her sister took her to hospital that night and she spent a fortnight in bed recovering from her injuries.

The pub had denied her claim and argued that if Ms Deehan did suffer any injuries that night, they were not sustained in the Lough Inn.

In its defence, the pub also argued that Ms Deehan did not fall as she had alleged.

The pub’s lawyers claimed she had been boisterous on the night and was escorted off the premises as, it was alleged, she had had too much to drink.

This allegation was rejected by Ms Deehan.

1 Covid-19: One death and 363 further cases confirmed in State
2 ‘Insane’ gathering of hundreds of students in Galway condemned
3 Prepare for six to nine months of Covid-19 restraints, warn health officials
4 US election: Everything you need to know about Tuesday’s presidential debate
5 Speed and distance of Covid-19 droplets tracked by Mater researchers
Real news has value SUBSCRIBE