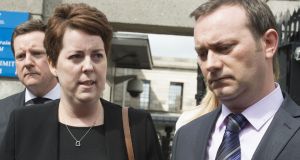 Chief Justice Frank Clarke has expressed sympathy on behalf of the Supreme Court to the family and friends of Ruth Morrissey, who died last weekend from cancer. File photograph: Dave Meehan/The Irish Times.

Chief Justice Frank Clarke has expressed sympathy on behalf of the Supreme Court to the family and friends of Ruth Morrissey, who died last weekend from cancer.

The court, he said, had noted the “very tragic circumstances” of the case last March when giving judgment on the main issues in appeals over a decision in favour of Ms Morrisey and her husband, Paul over the misreading of her cervical smear slides.

These circumstances “now have, most sadly, come to fruition”, the Chief Justice added.

He said that because the court’s function was to decide the important legal issues in the appeals, “with potential to affect many more cases even beyond the scope of Cervical Check”, it had to rule on a small number of outstanding issues.

He made the comments in a judgment dealing with final orders on the appeals. Two laboratories — Quest Diagnostics Inc and Medlab Pathology Ltd — and the HSE had appealed aspects of the 2019 High Court judgment on the case, a test case concerning the standard of care in cervical screening.

Mrs Morrissey was not told until 2018 that a review carried out in 2014 showed smears taken under the CervicalCheck screening programme in 2009 and 2012 had been incorrectly reported. Her cancer returned in 2018.

The High Court found in favour of the Morriseys against all three defendants and awarded total damages of €2.16 million. The High Court said the HSE, apart from a sum of €10,000, was entitled to an indemnity against the laboratories.

A five judge Supreme Court last March dismissed most of the appeals by the laboratories and HSE over the High Court decision, and held the High Court was correct in applying a standard for screening where screeners should have no doubt that a sample is adequate and does not contain any suspicious material before stating it is clear.

The court allowed Medlab’s appeal over €575,000 of the award to Mr Morrissey, relating to services which would have been provided to the family by Mrs Morrissey were it not for her shortened life expectancy.

The last government had guaranteed, irrespective of the outcome of the appeals, the couple would get the full damages, which have been paid to them, and their costs.

The Supreme Court last week heard submissions on final orders in the appeals. The HSE and Quest argued, despite not having themselves appealed the €575,000 award to Mr Morrissey, the reduction obtained by Medlab meant the final damages award against them should also be reduced by €575,000.

Any such order would not affect the Morrissey’s but would affect how payment of the damages was divided up between the parties. The Chief Justice said, in the “very unusual” circumstances of this case, the more just course of action was to also reduce the award against the HSE and Quest by €575,000. In all other respects, the appeals should be dismissed, he said.

On costs, he said the entire costs of all the appeals should be treated as the costs of a single procedure or appeal involving all issues arising under the appeals. Because Medlab won part of its appeal, it would be just to confine the Morrisseys costs against Medlab to two thirds of the total costs of the appeal, he said.

While that would inevitably increase the costs to be paid by the HSE and Quest, there was “nothing inappropriate” about that because neither of those parties had appealed over the damages sum.

He awarded two thirds of the entire costs jointly and severally against all three appellants with the remainder jointly against the HSE and Quest. He made no comment concerning where the ultimate burden of those costs should lie as issues of indemnity and contribution were not before the Supreme Court.