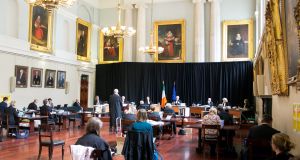 The Supreme Court is sitting in the dining hall at the King’s Inns on Constitution Hill Dublin 7. Photograph: Collins Courts 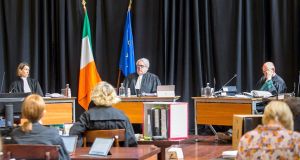 The Chief Justice of Ireland Mr Justice Frank Clarke presides over a session of the Supreme Court in the dining hall at the King’s Inns on Constitution Hill Dublin 7. Photograph: Collins Courts

A seven-judge Supreme Court will give judgment on a later date on an appeal concerning the adequacy of a national plan to reduce rising greenhouse gas emissions.

Friends of the Irish Environment (FIE) claims the National Mitigation Plan 2017-22 lacks urgent measures to substantially reduce emissions and thus breaches rights to life, bodily integrity and a healthy environment under the Constitution and European Convention of Human Rights.

The plan is also inconsistent with the State’s obligations under Section 4 of the Climate Action and Low Carbon Development Act 2015 to achieve Ireland’s transition to a low carbon, climate resilient and environmentally sustainable economy by end 2050, FIE argues.

The State claims the group’s case is an “attack on policy choices” made by government and an impermissible attempt to have the court prescribe government policy on emissions.

In its appeal against the Government, Ireland and Attorney General, FIE contends the plan fails to set out measures to substantially reduce emissions by 20 per cent by 2020 and further reductions in the short to medium term.

It says such measures are required under the 2015 Act and EU and international agreements and the failure to provide for them breaches the rights to life, bodily integrity and a healthy environment.

FIE secured the “leapfrog” appeal directly to the Supreme Court after the High Court rejected its case. The issues raised include the availability of judicial challenge to the legality of the plan and the broader environmental rights asserted under the Constitution, European Convention of Human Rights and/or from Ireland’s international obligations.

In submissions for the State, Eileen Barrington SC said FIE’s case involves a “misunderstanding” of the National Mitigation Plan and is not justiciable because it concerns policy choices by government.

FIE is pursuing an “agenda approach” which does not fit into the constitutional framework, she said.

FIE argued Ireland has put itself on a trajectory that poses a risk of harmful climate change by not imposing emissions targets of between 25 and 40 per cent. “If that is not policy, what is?” she asked .

FIE had not contended Ireland breached a “binding” domestic, EU or international standard or obligation by not giving effect to such a policy but still wanted the court to set aside the plan, Ms Barrington said.

A time issue arose because the National Mitigation Plan runs to 2022 and is the first step of a process designed to run to 2050. FIE is seeking relief regarding a prescribed policy focussed on 2020 and presented its case as if the plan is a “full response” by the State to climate change when the plan is part of a “jigsaw” of interconnecting and evolving measures.

Climate change is a “global challenge” and FIE is conflating science with the NMP to argue any deficiencies on Ireland’s part will worsen the risks, she said. Ireland’s emissions are a “tiny part” of global emissions, 0.13 per cent in 2015, and Ireland delivers its obligations through EU commitments.

Rory Mulcahy SC, also for the State, said FIE lacks the necessary legal standing to assert the plan breaches constitutional and European rights. While FIE appeared to argue its “bona fides” was sufficient to assert constitutional rights, that was not so.

The State is not suggesting Ireland’s international obligations concerning climate change do not matter, he said. Because FIE had framed a case of breach of constitutional and ECHR rights, it must show the plan will have the claimed effect on rights and the State’s obligations but there was “nothing in the evidence even remotely to show that”.

Closing the case for FIE, Brian Kennedy SC argued it has legal standing to assert constitutional and ECHR rights due to the direct impact on citizens from the level of emissions the State is permitting to occur.

He disagreed the appeal is confined to particular provisions of section 4 of the 2015 Act, providing for making a national plan specifying how Ireland proposes to transition to a low carbon economy.

That left Ireland facing greater expense in meeting 2030 and 2050 targets and FIE could not see how the plan would lead to Ireland becoming a low carbon economy by 2050, he said.