People screening for cancer should not be ‘frightened of the courts’ 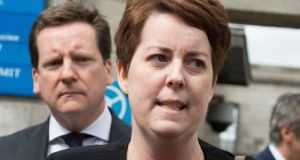 The government has guaranteed, irrespective of the outcome, they will retain their €2.1 million damages award. Photograph: Dave Meehan

A legal test requiring cervical cancer screeners to have absolute confidence before reporting a smear slide as negative would be “totally inappropriate” and could have serious implications for women and screening programmes, the Supreme Court has been told.

There is a difference between screening and diagnosis and an absolute confidence test would lead to more false positives and rescreening, Michael Cush SC, for Quest Diagnostics Ireland, said.

He said there was “something frightening” about the word “absolute” and screeners “should not be frightened of the courts”.

The HSE also argued against any such test which, its counsel Patrick Hanratty SC said, could be invoked to apply to screening for other conditions and other medical situations.

The core issues include what standard of care should apply in cervical cancer screening and whether the HSE has any liability for acts and omissions of laboratory screeners.

The appeal, by the HSE and two laboratories — Quest Diagnostics Ireland Ltd and Medlab Pathology Ltd — is against a July judgment by Mr Justice Kevin Cross. He awarded €2.1 million to Ms Morrissey and her husband Paul over misreading of her cervical smear slides after saying absolute confidence is a screener’s practical duty in relation to their analysis of what is in a slide.

He ruled the HSE was entitled to an indemnity against the laboratories for all but €10,000 of the €2.1 million damages. The €10,000 arose from failure to tell Ms Morrissey for some years of an audit review of her smear tests.

Ms Morrissey and her husband were in court on Monday and the Government has guaranteed, irrespective of the appeal outcome, they will retain the €2.1 million damages.

She was diagnosed with cervical cancer in 2014 and her case related to cervical smears taken under the CervicalCheck screening programme in 2009 and 2012.

She was not told until May of last year that a 2014 audit showed two smears taken under the programme were reported incorrectly. The appellants’ concerns include the High Court finding screeners should have “absolute confidence” both about the adequacy of a slide sample and that a test result has no abnormalities before passing it as clear.

Mr Hanratty, for the HSE, said it does not dispute that a screener who has a doubt about a slide should not pass it as negative but that was an issue of the applicable standard rather than a “legal test” of absolute confidence.

The HSE is concerned any absolute confidence legal test could be extended to screening for other conditions and other medical situations such as choice of treatment and drug options, he said.

The correct methodology is to consider whether there was negligence and apply the principles as set out previously by the Supreme Court in the case of Dunne v the National Maternity Hospital, he argued.

There was also “no basis” for the High Court finding the HSE had vicarious liability towards Ms Morrissey and no underlying policy reason or justification for imposing liability on the State.

Mr Cush, for Quest, said the Dunne principles are well suited to addressing allegations of negligence against screeners but an additional absolute confidence test is confusing, contrary to legal certainty and “totally inappropriate”.

To suggest any person who is required to exercise judgments is legally required to have absolute certainty in those is “contrary to common sense”. It was “particularly inappropriate” for screeners because of high rates of false negatives even in properly run screening programmes and no reasonably competent screener could possibly be absolutely confident in every negative call they make.

He said about 90 per cent of all slides are currently reported as negative but, if screeners have to have absolute confidence in every negative call, that rate will fall.

Mr Cush also argued the High Court failed to adequately engage with the evidence of Quest’s experts about what was to be seen on the relevant slides examined by the laboratory and how those should have been interpreted.

The appeal continues on Tuesday.