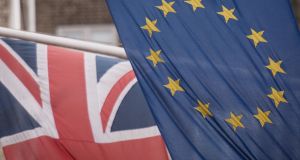 EU Court of Justice has ruled that the notification of intention to withdraw from the EU does not have the effect of suspending the application of EU law in that member state. Photograph: PA

The Supreme Court will decide next week whether an Irishman has effectively lost his battle to prevent his extradition to the UK on the basis of Brexit.

Thomas O’Connor, Cloughbeirne, The Walk, Co Roscommon, is wanted in the UK to serve a four and a half year sentence in connection with a Stg£5 million (€5.7 million) tax fraud.

Last February, the Supreme Court referred his case to the EU Court of Justice to determine issues concerning the impact on Brexit on extradition requests from the UK.

The issues concerned whether an EU state is required to refuse to surrender an EU citizen to the UK if that citizen will remain imprisoned there after the UK leaves the EU in March 2019.

The High Court in Ireland later separately referred similar issues in the RO case, involving a Polish man arrested in the State on foot of a European Arrest Warrant issued by the UK.

The RO case was fast-tracked by the CJEU because, unlike Mr O’Connor, RO was in custody.

In a significant ruling last month on the RO case, the CJEU ruled the UK’s Article 50 notification of its intention to withdraw from the EU does not require that execution of a European Arrest Warrant issued by the UK must be refused or postponed.

The CJEU said notification of intention to withdraw from the EU does not have the effect of suspending the application of EU law in that member state and, consequently, the provisions of the Framework Decision on extradition and principles of mutual trust and mutual recognition in that decision continue in full force and effect in that state until the time of its actual withdrawal from the EU.

That decision has implications for about 20 other cases here and for the UK’s efforts to procure the extradition of citizens from other EU member states.

Following the RO decision, the CJEU wrote to the Supreme Court suggesting RO appeared to have determined the questions referred in Mr O’Connor’s case.

When Mr O’Connor’s case was mentioned before a five judge Supreme Court on Friday, Dr Michael Forde SC, with James O’Reilly SC and Paul Comiskey O’Keeffe BL, argued the CJEU decision in RO did not determine all the matters raised and he wanted an opportunity to persuade the CJEU of that in submissions.

There are issues including whether, as a matter of international law, his client would have access to the CJEU post-Brexit if any deal between the EU and UK did not provide for such, he said. Mr O’Connor was also concerned, if extradited, he would get deductions for time spent in custody in the UK on foot of an earlier warrant.

The issue for decision now is whether the CJEU should continue with the O’Connor reference and the State maintained the Supreme Court should inform the CJEU that is not necessary in light of the RO decision.

Mr O’Connor was sentenced in January 2007 following a six week trial at Blackfriars Crown Court, London, and faces further charges of absconding and breaching his bail in England.

After he returned to Ireland, he was arrested under a European arrest warrant and the High Court ordered his extradition in December 2014. The Court of Appeal later dismissed his appeal against that order and he then appealed to the Supreme Court.