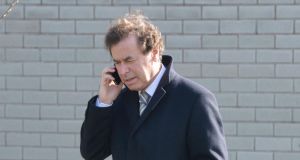 Former minister for justice Alan Shatter who is claiming that the commissioner erred in fact and in law in reaching his conclusions. Photograph: Alan Betson/ The Irish Times

Former minister for justice Alan Shatter is seeking to overturn the decision of the Data Protection Commissioner who found he had breached data protection laws when he divulged information relating to TD Mick Wallace on RTÉ’s Prime Time programme.

When the matter was mentioned in the Circuit Civil Court this morning Judge Alan Mahon directed that Mr Wallace be joined as a notice party to Mr Shatter’s appeal.

Senior counsel Frank Callanan, who appeared for Mr Shatter, and barrister Paul Anthony Mc Dermott, who appeared for Commissioner Billy Hawkes, told the court they were not opposing Mr Wallace’s application to be joined to the proceedings.

The commissioner, in his decision, found that the then minister was a “data controller” in relation to the “personal data” about Mr Wallace at the time of the RTÉ programme.

He also found Mr Shatter had failed to uphold his statutory duties under the Data Protection Acts in disclosing on the television programme that Mr Wallace had been cautioned by gardaí for using a mobile phone while driving.

In his appeal documents Mr Shatter claims the commissioner erred in fact and in law in reaching his conclusions.

Mr Noble, of KOD Lyons, solicitors, said Mr Wallace, the independent TD for Wexford, was the person who had made the complaint about the conduct of Mr Shatter to the data commissioner.

It was Mr Wallace’s case that the appeal by Mr Shatter concerned the validity of the commissioner’s decision and it was appropriate that his client have an opportunity to have access to the appeal papers and to be allowed to make representations to the court in relation to all issues raised.

The matter was adjourned for mention next month but the court heard the appeal was unlikely to be heard until October.