Some allegations ‘had never been reported to anyone’ prior to quitting, tribunal finds 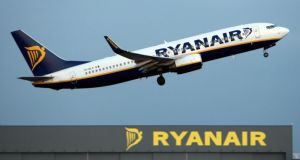 Ryanair told the tribunal it accepted flight attendant Brian Butler had raised some issues, but it said he had resigned before the company had an opportunity to address them. Photograph: Chris Radburn/PA Wire

A Ryanair flight attendant who claimed he was so demeaned and bullied by a supervisor that he was on occasion physically sick, has lost his case at the Employment Appeals Tribunal.

Former cabin crew member Brian Butler claimed he had been particularly criticised in group, pre-flight checks when he did not answer questions fast enough, even though he has a stammer.

Mr Butler said when a particular supervisor was on his roster he became nervous, apprehensive and unwell, to the point of being physically sick. He said he found his job, based in Shannon, was made intolerable.

Ryanair told the tribunal it accepted Mr Butler had raised some issues, but it said he had resigned before the company had an opportunity to address them.

If Mr Butler felt the issues were not being addressed fast enough, he could have formalised the complaint through the company’s grievance procedures, but he had not done so.

Instead he had gone on sick leave and cited an ear ache when resigning, the company said.

The tribunal said some of the issues Mr Butler raised “had never been reported to anyone in the respondent company prior to his resignation”.

It said Mr Butler knew of the grievance procedure as he had in the past used it to make a complaint over a separate issue.