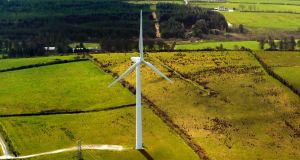 Objectors claim that an inadequate environment impact assessment was carried out by the planning authority before consent was given. Photograph: David Sleator/The Irish Times

A High Court challenge has been brought against An Bord Pleanála’s decision to grant planning permission for a large wind farm development in the midlands.

Last June the planning board granted Green Wind Energy (Wexford) Ltd permission to build 29 electricity generating wind turbines with a maximum height of up to 166m (545ft), plus ancillary buildings, all on a site just north of Rhode, Co Offaly.

They allege the EIA conducted by the board failed to identify, describe and assess the direct and indirect effects the development will have on people, flora and fauna, soil, water, air climate and the landscape.

It is also claimed that in compiling the EIA the planning authority failed to properly take into account submissions made by members of the public during the consultation process.

In their proceedings against the board the residents, who are members of the Rhode Parish Wind Turbine Action Group, and Mr Sweetman are seeking an order quashing the board’s decision to grant permission for the proposed wind farm.

Breaches They are also seeking a number of declarations, including that the decision breaches EU directives on the effects certain projects have on the environment.

They also seek a declaration from the court that a proper EIA, as required under EU directives, was not carried out by the board before permission was granted.

They have secured leave from Ms Justice Marie Baker in the High Court to challenge the decision. Permission was granted on an ex parte basis, where only one side was represented in court.

The case will return before the High Court in November.