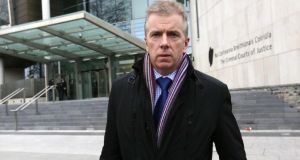 Joe O’Reilly was the second of the “Maple 10” to take the stand. Wearing a blue-check shirt, bright blue tie and matching socks, he said he was a “developer, builder”.

Among the many projects the jury heard he had worked on were the Dundrum Shopping Centre, the Pavilions Centre in Swords, the Ilac Centre in Dublin 1, retail units near the Gaiety Theatre, and the Grand Canal Theatre and adjoining office blocks in Dublin’s docks.

O’Reilly agreed he had spent €580 million alone assembling a site on O’Connell Street to build a new shopping quarter.

He was asked was he a billionaire in 2008? “Hard to tell,” O’Reilly said. He said he had other borrowings with Ulster Bank, Bank of Ireland, AIB and KBC. He said the amount of personal recourse he offered to his lenders was in some cases interest only.

O’Reilly said he owned a company called Castlethorn Construction that had built thousands of homes. He agreed there was nothing “desperately unique” about a bank approaching him with a deal. However, he said he had never bought shares in Anglo before July 2008.