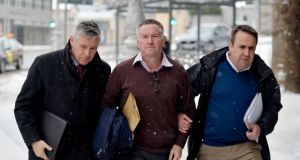 Former solicitor Michael Lynn, who was extradited from Brazil to face multimillion euro theft charges, has lodged an appeal against his unsuccessful bid to get High Court bail.

In March Mr Lynn was extradited to Ireland from Brasil, where he has been living for several years.

He has lodged an appeal against the High Court’s refusal to grant him bail which was fixed for hearing on June 14th in the Court of Appeal.

During case management proceedings in the Court of Appeal on Friday, barrister Michael Hourigan BL, for the Director of Public Prosecutions, told Mr Justice George Birmingham that the High Court bail application had been a “lengthy matter” taking up the best part of a day.

Barrister Karl Monahan, for Mr Lynn, asked for an order requiring his client be brought to court on that date.

Mr Lynn is currently in Cloverhill Prison, the court heard.