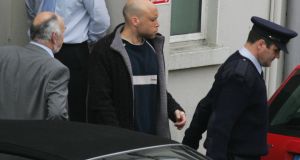 Mark Nash is taken from the Bridewell Court after he was charged in October 2009 in connection with the deaths of Sylvia Shields and Mary Callinan in Grangegorman. Photograph: Cyril Byrne 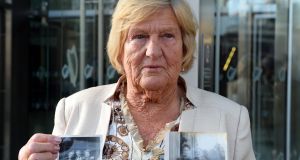 Mark Nash has opened an appeal against his conviction for killing two women in Dublin 20 years ago.

Nash was found guilty in 2015 of the “cold case” murders of Sylvia Sheils (59) and Mary Callanan (61) between March 6th and 7th, 1997, in sheltered accommodation in Grangegorman.

The 44-year-old, who is originally from England but has last addresses at Prussia Street and Clonliffe Road in Dublin, had pleaded not guilty at the Central Criminal Court to the murders but a jury found him unanimously guilty.

Nash had already been sentenced to life in prison in October 1998 for murdering two people in Co Roscommon and leaving a woman seriously injured.

Opening an appeal against his conviction for the double murder on Monday, Nash’s lead senior counsel, Hugh Hartnett SC, told the Court of Appeal that it was an unusual case “in some senses extraordinary”.

Shortly after the double murder, Mr Hartnett said Garda attention turned to a man named Dean Lyons as a result of things he was alleged to have said to other people.

Lyons was arrested and in a number of interviews “he confessed” not only in custody but to his parents and various other people, Mr Hartnett said, before adding that these admissions were allegedly corroborated by factual evidence from the ground.

He said a short time later Nash, who was in detention on foot of another double killing, made admissions to having carried out the Grangegorman murders.

Mr Hartnett added that there were inconsistencies between the account he gave and what was found on the ground. This lead to a very difficult situation for the Garda and the DPP, Mr Hartnett said. Various senior officers were tasked with examining what was going on.

A “tremor” had gone through Garda headquarters when two people were confessing to the these murders, the court heard.

Mr Hartnett said Lyons died in Strangeways Prison in the UK in 2000 and a prosecution was no longer in a position to proceed.

A jacket had been seized from Nash’s house and there were issues around the admissibility of that as evidence. It was tested and nothing of probative value was found. There was no evidence of blood staining.

At the time, Mr Hartnett said a lot of material - something the size of a 50 pence piece - was required in order to get a DNA profile.

Nearly 10 years passed and science advanced, he said, to the point that it was now possible to get DNA from material that was invisible to the naked eye.

Mr Hartnett said DNA was found around the button threads of Nash’s jacket but it was not possible to say whether it was a tiny piece of blood, hair or a skin cell. It was a tiny speck and on that basis, Mr Hartnett said, the DPP decided to prosecute.

He said there were two main planks to the prosecution’s case, namely the admissions made by Nash and forensic evidence.

He said the trial was “blighted” by late disclosures and a lot of evidence only emerged from cross-examination.

It emerged during cross-examination that the victims’ bed clothing had been brushed down in the same room the jacket was forensically examined six weeks later.

Because of renewed sensitivities around their procedures, Mr Hartnett said precautions taken by the Forensic Science Laboratory were now acute, but that was not the case in 1997.

He said the trial judge failed to deal with the complexities of the contamination issue without properly addressing the controversies.

He said the defence were particularly concerned about visits by defence experts to the Forensic Science Laboratory, which seemed to have been approached in a “catch me if you can” manner.

The experts who went to the lab were never told there had been a risk of contamination or that the bed clothing had been examined in the same room as the jacket. He said the defence only learned of a review of procedures in the FSL during cross examination and “incredibly” not a screed of paper existed in relation to the review.

Mr Hartnett said there was an obligation on scientists to be up front and opaque with other scientists.

He said the defence were inhibited in the case they wished to make because material was only received two-thirds of the way through cross-examination.

Mr Hartnett further submitted that the trial judge erred in refusing to stay the prosecution and subsequently in refusing to grant a direction to acquit Nash.

He said it was unfair to allow the prosecution to proceed in view of the delay, the death and loss of various witnesses and in particular, the death of Dean Lyons, who had been interviewed by two senior gardaí before his death and was never asked about how he had significant knowledge of the crime such as details of the scene and how the deceased had been stabbed.

If the defence had applied for a direction to acquit Nash every time there had been late disclosure, there would have been some 22 applications, Mr Hartnett said.

Also representing Nash, Patrick McGrath SC, submitted that his client’s detention in respect of the Grangegorman murders was unlawful, that he did not have proper access to his solicitor at the time and that no warrant was obtained to permit the search of Nash’s premise where the jacket was recovered.

The prosecution contended that that Nash had given oral consent for the search, the court heard.

Mr McGrath said Nash was already in detention in respect of the Roscommon murders and there was no evidence that a second custody record was opened, as was required, or that the garda member in charge had formed the opinion that detention was necessary for the proper investigation of the Grangegorman murders.