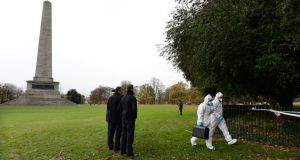 Members of the gardaí at the scene in the Phoenix Park, by the Wellington Monument where the body of a man was found burned. Photograph: Alan Betson / The Irish Times

A homeless man whose burned remains were found in the Phoenix Park, died as a result of blunt force trauma to the head, his inquest has heard.

Gerard Donnelly (36) of no fixed abode was found dead near the Wellington Monument in the Dublin park on November 29th last year.

Twenty-seven-year-old Ciarán Moran of Camden Hall, Camden Street in Dublin city centre is currently before the courts charged with his murder.

At the opening of the inquest at Dublin Coroner’s Court, Detective Inspector Colm Murphy requested an open-ended adjournment until criminal proceedings have been completed.

The inquest heard that Mr Donnelly’s identity was confirmed using DNA sampling by Dr Hilary Clarke, a forensic scientist at the state laboratory.

The post-mortem was carried out by state pathologist Professor Marie Cassidy and coroner Dr Brian Farrell said that her preliminary report gives the cause of death as blunt force trauma to the head.

Dr Farrell adjourned the inquest without a date pending completion of criminal proceedings.